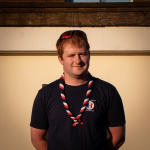 I would suggest providing a better profile picture. You look dreadfully bored in the current photo. The Legend of Swipe Talk

I noticed you reverted lego lord's comment on your user name space page, however there was a Comments section and since there was he has the right to edit the comments section. The Legend of Swipe Talk

I know that, but I also stand by the right to remove any comments from my talk page as long as they are not warnings from administrators. --Lewis Cawte (Talk - Contact) 22:15, January 25, 2011 (UTC)

I was referring to the "Admin Election" page of yours, lego lord added a comment in the comments section, but you deleted it and said he shouldn't even touch your user page. By the way can you leave a message on my talk page? The Legend of Swipe Talk

Look at the page history, it was for the admin election last July/June. It is saved as an archive. I don't mind if its in the relative talk namespace, but you don't edit 6 month old archive pages especially when they are user namespace. --Lewis Cawte (Talk - Contact) 22:30, January 25, 2011 (UTC)

If it is under your name, then remove the comments section. Seriously, this time contact back on MY talk page. The Legend of Swipe Talk

Can you please take me off the brickpost Delivery thing. If I want it I will tell you. Thank you. The Legend of Swipe Talk

Hey captain jag I got what it is. Here is a quote from a wikia staff "The Community Council is a group of Wikians we've put together to help give us early stage feedback on our new product ideas. We'll be rotating members every few months, though we aren't accepting any applications right now."--dog4591/Mugsiedoodle/TheParadoxBug 05:03, April 27, 2011 (UTC)

Hey, someone suggested that a bot could be used to work a specific template. Can you take a look at that page, and see if it is possible please? Jag 19:28, April 6, 2011 (UTC)

In regards to my proposal for changing the way we do community discussions...

You commented that you don't like any system in which the majority view isn't followed - but if you actually read what I said, you would have found that this system does accomodate that, to an even greater extent.

When somebody proposes something with the new system, a discussion takes place, in which all users are able to voice their opinions. Users are able to defend their views, and eventually, an admin or neutral third party will close the discussion and implement it, after examining all arguments from both sides. Now, you are obviously wondering how that translates into the majority getting what they want - well, it doesn't really, because it works better than that. As LL showed us, the majority isn't always what it seems to be - it can be dominated by sockpuppets, meatpuppets, and other people influenced by the vote of another user. With this system, none of that happens, because all users are able to present their concerns in a way which they will be received. Allow me to demonstrate with an example:

A user proposes to delete the main page, since it is worthless. The following votes are made:

With these comments, consensus would be as such:

Do you see how this then represents the majority view a lot better than a simple counting of 50% support and 50% oppose? This consensus satisfies the views of 75% of the users voting on it; cakemaster, shortandsimple and person999 all commented that they don't like the way it looks, so this course of action allows 25% more people to be satisfied with the outcome that with the current system, which would just say that since there are equal people voting on each side, the status quo will be maintained and the main page won't be deleted.

The new system is all about satisfying as many users as possible, while also following the path that will be best for the wiki as a whole. That just isn't possible with our current system that is susceptible to sockpuppets, meatpuppets, and other biased votes. I'd appreciate it if you'd reconsider your position, and please ask me any questions that you might have. The worst type of oppose is one made out of ignorance. ajr 20:08, April 22, 2011 (UTC)

I'm so sorry that I haven't gotten to this earlier, but ah well, at least you have it now. I hope that you enjoy your sigfig! LEGO Lord Talk 13,497 Edits! ---- LEGO LOTR is coming!

Hello, Lcawte. (Do you have a preferred nickname?) I'm Roads, an admin from the Ben 10 Fan Fiction Wiki, and I've noticed your preset, irremovable Answers Site link in the My Tools bar. Can you give me the whole text for only this feature from MediaWiki:Common.js? If you're as bad with that kind of thing as I am (:P), who should I ask? I'm interested in adding this on my wiki.

Ignore the above; I figured it out. But here's something new. How did the Project namespace (Brickipedia) get changed from "Lego [or LEGO] Wiki" to Brickipedia, what it is now?

why are you on chat just staying there saying nothing youve been there since last week --the question is:is or is not? 18:06, September 3, 2011 (UTC)

I have a lot of wireless dropouts, and, with the amount of tabs open, firefox is prone to crashing, haven't got round to sorting them out yet though. --Lewis Cawte (Talk - Contact) 09:20, September 5, 2011 (UTC)

So you're not really watching it? It certainly seems like you leave whenever someone mentions you, and then come back... Jag 00:09, September 6, 2011 (UTC)

I definately know who you are! (Me, just better at most (if not all) of the languages! :) ) You must be going to the MW Hackathon. That'll be good. I've added you to the skin project. Oh and the PyWiki thing, please do have a go. I'm going to too, but I don't have alot of experience with python, so I might not get too far.

Okay, you organised the Hackathon! (Wishes he could come) If only it were four years later :( - nxt

Feedburner seems to be the best for this, twitterfeed doesn't work as well. Also, I don't see the news blog Cj made appearing on @Brickipedia.  Ariistuujj »Talk Page« 23:54, 11/1/2011

I'm guessing you know a bit about Pywikipedia, having set up the Wikia family! I've been tring to set up Pywikipedia on my PC, and am having a few problems. I've done generate_user_files.py and stuff, but whenever I put in a script, it tries to execute it on the "Wikia" wiki (pages like this) Do you know how I set it up to work on a certain wiki?

How did you get your family file, have you tried generate_family_file.py ? And can you give me some more details on what your actually trying to do? --Lewis Cawte (Talk - Contact) 14:15, December 2, 2011 (UTC)
Oh the Hackathon thing - what resricts me is the fact I'm 13. Parents... - nxt

I foolishly made the logo in GIMP and didn't even save the XCF file. I opted to remake it in in Inkscape. It took about ten minutes; here's the result:

A movie? Hmm? I don't know anything about that, but we (the BrickPost team for now...) are going to be using Brickipedia and its YouTube channel a bit more than we currently do :) But a movie could be interesting, not sure what'd happen in it... maybe a Brickipedia documentary? --Lewis Cawte (Talk - Contact) 12:37, March 31, 2012 (UTC)

Yeah, I know about add_text, I just wanted to do something a little more complicated:

I do have plans to improve it. (For example, at the mo, if I run it, say, three days after the 2 weeks expire, it will always be three days late.) I'm going to fix these sometime very soonish.

Hey, I submitted a BFA, and it's been like 2 week since I got the last response. Mind checking it? :) Drewlzoo

It seems as though my Bot request has been forgotten (again). :P BFA Bot1200

Hey, I'm trying to get my BFA request back to activity. CJC gave me a link to his test wiki were I made the edits. Would you mind looking at it? Thanks! Drewlzoo

Retrieved from "https://brickipedia.fandom.com/wiki/User_talk:Lcawte?oldid=1100264"
Community content is available under CC-BY-SA unless otherwise noted.