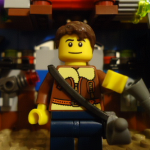 I think KoN thought up the definitive Ca$h Cow origin, but I really like what you're doing. I think a Custom Ca$h Cow theme page is now in order... -Cligra Join the redlink war!

There are several free photo editing programs out there... Among popular ones are GIMP and Paint.net. Also, if you're running on a Windows system you should have Microsoft Paint pre-installed. ;) βʊʛ™ Ʈҩƪҡ - Customs 15:29, April 7, 2012 (UTC)

(Sorry for the long response time) Yes, I could create the pages if you gave me pics, and it all sounds very good. ;) LONG LIVE DA CA$H! XD -Cligra Join the redlink war! 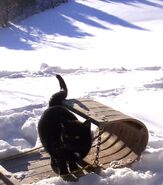 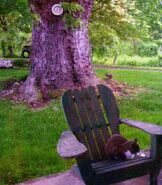 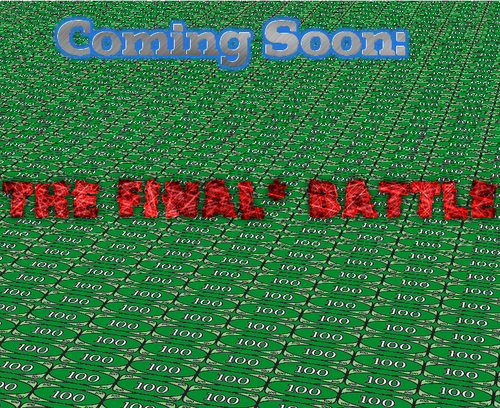 Sorry, I wasn't on Chat.... :P Sounds cool, but I'd like a plot summary of some sort, to make sure it doesn't clash with anything I have planned, if that isn't a problem. -Cligra Join the redlink war!

Sounds good! I think we can make it part of the official storyline. All staffs get destroyed at the end, although the Pirate Pig keeps his Monkeys, and the Ca$h forces fing the Munnie Bunnie$. We can make it a prequel to ish. one. -Cligra Join the redlink war!

It makes me hurt all over, and my brain is trying to dribble out my ears. I loved it! -Cligra Join the redlink war!

I quite like him, but he doesn't fit in with what I have planned for 2... (COWMASTA, The Resistance, and Ca$h Cow making friends outside Wikia) However, you can develop him into the plot for the third wave, if you want! :D -Cligra Join the redlink war!

I might try and make an Igor now, thanks for the reminder :P

What I mean is, the Ca$h Cow demons are minions of the evil Sannse. We must make sure they stay in Wikia and do not get to the Golden Skies. --Knight

No thanks, again. --Knight

Not really, because as administrator it is my responsibility to smack him and his compatriots in the face with a banhammer. :P I was originally going to take him to CUUSOO from here... I'll see what can happen. --Jay 18:16, January 17, 2014 (UTC)

Also, I was thinking that the Ca$h stuff story should more or less relate to what's gone on in Wikia for the past few years... I may need to rewrite the story you wrote to fix that, to account for Blobism and the rise of the Ca$h-repelling Brickimedia. (Also, that timeline should be fixed somewhat to give details of actual Brickipedian history.) --Jay 23:04, January 19, 2014 (UTC)

Hi, Simon 5750, I have some cool new ideas for the Ca$h Cult story line for the Ca$h Cow coming to power. Can I join the Ca$h Cult and put it on. I have left a copy of my idea here. If you could post your response on my talk page that would be excellent.

After the Ca$h Cow killed a wikia executive, the Tax Men pursued him, but as he ran by a group of ex-xoldiers houses, they rallied to his rescue and began to attack the tax men. The Ca$h Cow escaped with their help, and began to formulate a plot to rule Wikia. He then gathered a group of ex-soldiers in a secret safe house, where he explained his plan to them. His plan was ridiculously and pointlessly devious, yet it was the only way to gain control of Wikia with a grand army of 12 ex-soldiers.

The first phase of the plan went into action, with Ca$h Cow and 4 ex-soldiers sneaking into Brickipedia and stealing a number of bricks from various sets and creating a massive castle, with laser cannons, disintegrator rays, UFO's, walls, moats and all sorts of outlandish defenses. They also left prints and evidence implicating Code Monkeys as the thieves. 3 ex-soldiers were left in the castle to guard a pile of gold stolen from a set. As soon as the Wikia Rulers heard of this, they dispatched 70% of their Tax-Men armies to attack the fortress and a further 20% to the caves of the Code Monkeys. This meant that Ca$h Cow would use his enemies to defeat his other enemies. What the rulers weren't aware of was that an ex-soldier stole large amounts of Bada-Boom dynamite from the Ninjago Weapons page...

The second phase began with Ca$h Cow and 4 ex-soldiers sneaking onto Pirates of the Caribbean Wiki, and contacting Davy Jones. Ca$h Cow negotiated with Davy Jones showed him cash, he joined the Ca$h Cow and renamed himself Davy Jone$, but nobody got it until he wrote his name down. He also painted the Flying Dutchman's sails to look like hundred-dollar bills. Another ex-soldier snuck onto another page, and stole the Dead Man's chest and secretly kept it with him.

The third phase of the plan was perfect -- the Tax-Men who went into the caves and battled the Code Monkey were so distracted they didn't notice stacks of TNT blowing supports to pieces, and crushing all remaining Code Monkeys and 20% of the Tax-Men. Simultaneously, the battle at Ca$h Cow's castle was going excellently, as Tax-Men were distracted and destroyed, as the castle self-destructed,killing 70% of the Tax-Men.

The fourth -- and final -- phase of the plan was to send the Kraken into the moat of the Wikia Ruler's castle. The Tax-Men defenders were distracted and walls were destroyed. The rulers were shocked when the code inside their grand treasury was corrupted, filling the room with water and allowing Davy Jone$ and his immortal crew to invade the treasury and destroy the few remaining Tax-Men. Ca$h Cow then used his NRG true potential to destroy the Wikia Rulers and permanently delete them from Wikia. Then, Davy Jone$ prepared to revel in the rewards promised by Ca$h Cow, however, the ex-soldier with the Dead Man's Chest opened it with a Code Key and stabbed the heart, killing Jone$ and making him the next pirate captain to guide banned users to the Place of Deletion. Ca$h Cow then built an army of Robo SWATs -- renamed Robo $WATs -- from Brickipedia and publicly announced his takeover and opened a new phase in Wikia history. He announced and opened hundreds of stores and suppliers all provided by one company, so that Users and Creatures who make moneyz have their moneyz flow straight back into Wikia's pocketbook. Now, Ca$h Farmer was avenged, and all of Ca$h Cow's enemies were dead, and he alone would rule Wikia Forever and ever and ever...

I like your idea for a Ca$h themed pirate ship, we could incorporate the Flying Dutchman and Ca$hify it, turning it into tho Flying Ca$hman. Also, Dwight Goldman could be lead the Tax Men, couldn't he. He could survive Ca$h Cow's attack on the New Regime's castle because he was leading the Tax-Men into battle against Ca$h Cow's decoy castle where he and a few Tax-Men survived to rebel against Ca$h Cow's regime. What do you think?

Simon, I've taken the initiative and placed the set names for the 2 plot lines on the Da Ca$h theme, as well as character and location lists according to the content of our plotlines. I am downloading LDD now, and will be able to contribute sets to the theme very soon - just as soon as I figure out how to navigate it. I am also attempting to update it, so it may be a while before I can begin building.

P.s: I think it would be an excellent idea to make a custom Artemis Fowl theme. You could have a fowl manor set, Foaly's lab, and LEP shuttle. Maybe a Koboi labs set, and something based on the Infinity Code set(FYI: the Infinity Code was the lamest book in the series,no?).

I have LDD entered, and I am familiarized myself. And go ahead with the set organizations, I will start building some sets soon. My name's been added to the creator's list, I already have started one of the sets for my plotline.

I was thinking, that we know very little about the 4 web tribes. Maybe we could put a background story from the beginning of the internet, where Wikia does not exist. At this time, internet life is still developing, and everything is controlled by WIZARD(Worldwide Interconnected Zone And Regulation Demon), a program/process that monopolizes everything. It then discovers that 7 tribes have developed independent of it. These tribes are the Piano cats, Code Monkeys, Woops, Pop tart robots, Webcrawlers(search and destroy programs), Corruptroids and the Wikoids. WIZARD becomes worried about this evolution, and binds 4 of the tribes to staffs, however, the Corruptroids, Wikoids and Woops have become evil. The Woops have no choice but to obey WIZARD. WIZARD hates anomalies, as he can't control them, so he hates the tribes, and he attempts to destroy the other tribes. During this time, the Piano cats and Pop tart robots manage to cause WIZARD to lose their staffs, so they rebel and weaken WIZARD. Meanwhile, the Wikoids decide that the best way to undermine WIZARD is to create a competitor, so they find a group of people on the internet, who have created a strange, corrupt website. They then put their independent coding into it, making it impossible for WIZARD to control it, they call it Wikia. WIZARD grows angry, and after a time, becomes nearly forgotten, and now WIZARD stands for Worldwide Interconnected Zoning and Recording Demon, and is in charge of records and history, as well as a number of unimportant tasks. This story would explain the origins of Wkia, the staffs, tribes and everything. It would even be possible to connect it to a future story where the Corruptroids and Webcrawlers return to destroy Wikia.

Retrieved from "https://brickipedia.fandom.com/wiki/User_talk:Simon5750?oldid=1575473"
Community content is available under CC-BY-SA unless otherwise noted.