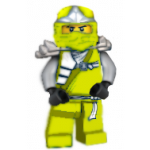 Q:i wish i could have an account just like you that would be awesome rite? lets talk for a long time and p.s bed time is for chumps rite?

why did you switch the cool clay ninja for a weird ninja cap? the ninja was cool man

Q:why cant the yellow ninja chat with me?

RE: Sig and wiki stuff

I fixed your signature for you. Also, I had a quick look at your wiki, and I have a few tips:

Basically, copy the code of that template, and then just replace the current titles ("Ninjas/Heroes:", "Serpentine (Snakes):", ect.) and links sections (the bits full of links) with what you want.

It may look daunting, but the template's actually fairly simple

Oh, and please remember to sign all messages with ~~~~ so we know who you are.

You could do. You could call it something else though if you liked. - nxt

Ah, I see what the problem is.

Oh, my mistake. Type {{User:TheYellowNinja/sig1}} in the box instead. -

I honestly have no idea, I've only ever done one review to test it out. Ask Berrybrick, he's an admin that does loads of reviews. -

BTW, I've just unblocked you from chat. Please don't get yourself blocked again though!

A week from the 26th, which was yesterday. - nxt

No, you can't make pages for the various tribes-we have a "no factions" policy here. Anyway, as far as mentioning you in my blog, no problem! :) (I like your avatar, by the way.) -Cligra Join the redlink war!

1. To begin with, you either need a single image you want to use, or, if you want to make a fancy one like the current snakes logo, several images.

2. If you intend to make a fancy logo, get Image editing software if you don't already have some (I use Gimp), and make the image (it must be 250 × 65 pixels at most.) NOTE: To begin with, I'd recommend using a pre-made image. That makes things simpler.

3. If you already have a simple image you want to use (say, for example, the Ninjago logo) you simply need to add it to the wiki. To do this, you must use the "Theme Designer" tool. It should be in your toolbar somewhere, and if it isn't, you can search for and add it.

4. Click on the Theme Designer tool, then, once there, select "Wordmark" once there, it should be easy to upload it. (IMPORTANT: The image should be no bigger than 250 × 65 pixels, or it will not work)

This is the best advice I can give, I think. (again, I'd recommend using a pre-existing image instead of trying to create one.) -Cligra Join the redlink war!

You can change what the Text-logo says (it can be edited from the same place that you can upload the logo, I believe), but I think that's as close as you can get. -Cligra Join the redlink war!

Hey YellowNinja can I be a creator for the Secrets of NINJAGO custom theme? I can add a better pic of LDD Lloyd ZX. --DaMaelstromGuy 21:55, February 13, 2012 (UTC)

Is this about the Secrets of Ninjago thing? I think he should have your permission, it's your theme afterall. --Berrybrick (Talk) 00:46, February 14, 2012 (UTC)

Wanna help with Ninjago Lost in Time? Thanks, Jmg115

Please help with Custom: Ninjago Lost in Time I am looking for skilled members

I'm glad you like it :D. I'm not really sure if you are popular or not but I knew you love ninjago (like me). So i wanted your opinion. Thanks!

I can't tell exactly what was going on, but I saw CM4S remove his name from your hate list (or something like that). And that is considered a personal attack to say those things about him, so don't. --Berrybrick (Talk) 21:21, March 6, 2012 (UTC)

Hi yellow im sorry if i don't be on chat by my internet was broken and dosen't work. Please send me the message on my talkpage about information when we can talk. Ok? I think you are not angry for me :\ See you later!--Serpentine General 21:27, April 4, 2012 (UTC)

Hi, and thanks for looking! :D

Well, Frakjaw on his own plus the postage from here to the USA would cost you about $5, plus the postage you have to pay to send the cheque to me would bring the cost for you up to about... $8 in total. If you still want to order anyway, email me your address (my email is kingofnynrah@gmail.com) and I'll send it off to you straight away. ;) -

Sure, I'll reserve him for you and I'll contact you when it's done. :) It'll probably be a few days at least. -

Haha, you're welcome. And yes, I'll ship him in an envelope, so it would be about that price. :)-

I've made an account but it takes 24 hours to approve so it'll be ready by tomorrow. In the meantime though you can tell me what you want to order. :) -

Sorry for replying so late, but for some reason it didn't notify me that I had a new message.

I also had to process another order during that time but luckily the buyer didn't buy any of the items you mentioned, so I've packed your order and it's ready to ship. :)

My PayPal is also up now, do you want me to send it to you to your email? -

Sorry for replying late, and I'm also sorry to say that I had a problem with the Paypal account so I've decided to close the Bricklink shop.

There are several other shops on Bricklink that sell Frakjaw though, most of them a lot closer to you. Again, I apologize. :( -

Retrieved from "https://brickipedia.fandom.com/wiki/User_talk:TheYellowNinja?oldid=1076747"
Community content is available under CC-BY-SA unless otherwise noted.