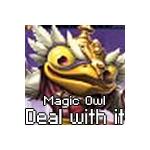 I saw that you asked Cligra about the MOC competition, and I want to say, it isn't limited to 17th-century pirates. You can also do Space Pirates. If you're not sure, then just make a space vehicle designed to steal something from other ships, and post that. Looking forward to seeing your entry! Jay

What Erkelon said. Also, in answer to your question, it isn't very likely that we will do "Space" as a theme for a while, as we did it once last year. However, you can always do a space-version of whatever the theme of the month happens to be, or just wait until a slightly more specialized month comes along (such as Galaxy Squad or Blacktron, which are both the sort of thing we could do in the future). -Cligra Join the redlink war!

Just do whatever you want- it's your MOC. :) -Cligra Join the redlink war!

Retrieved from "https://brickipedia.fandom.com/wiki/User_talk:Yokey25?oldid=1472655"
Community content is available under CC-BY-SA unless otherwise noted.