"I’m supposed to drink WHAT?!"
―Vampire

The Vampire, named Rutger Hemoglobin,[1] is a minifigure from 8684 Minifigures Series 2.

The vampire has unprinted black legs. His torso is black, and printed with a black jacket, a dark red vest and bow tie, a white waistcoat, and a gold pendant. His arms are black, and he has white hands. He wears a tattered and edged black cape. His face is white, and he has a mouth with white teeth in it. His eyes are red with white dots in them, and are surrounded by circles of grey. He has large black eyebrows with a small crease between them. He has slicked back black hair. He comes with a black bat as his accessory.

He comes with many new pieces, including a new cape, face and hair. He also comes with a bat. His hairpiece is the same as the Karate Master, Count Dooku and The Joker, among other figures.

The Vampire appears in the video game LEGO Universe as a Paradox vendor named Rutger Hemoglobin. Oddly enough, Rutger claims to be "not bad for over 300", although the Vampire's bio says he is only 200.

In The LEGO Movie Video Game, the Vampire (who is referred to as Lord Vampyre) is stated to be an evil ruler from the unseen "monster realm" that comes to fight Lord Business' forces. He can throw bats in the game.

The Vampire appears in The LEGO Batman Movie as one of the inmates of the Phantom Zone alongside the Swamp Creature and Mummy. He speaks in a Romanian accent in the film, similar to the iconic Dracula actor Bela Lugosi, as he tells The Joker that they are listening to his proposition.

The Vampire makes a cameo appearance in the sequel as a resident of Apocalypseburg, and is seen when Emmet leaves Batman's hideout to go save his abducted friends by General Sweet Mayhem. 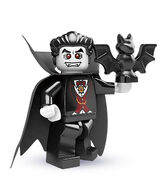 Digital rendering of the Vampire. 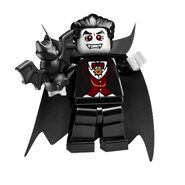 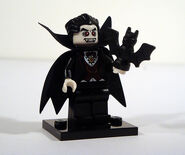 The Vampire on his base. 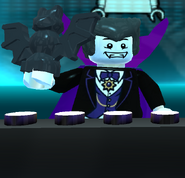 Vampire as seen in The LEGO Movie Video Game. 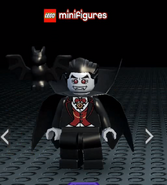 Deutsch Français
Community content is available under CC-BY-SA unless otherwise noted.
... more about "Vampire (Minifigures)"
RDF feed
Accessories
Bat (Black) Cape (Black) +
Appearances
8684 Minifigures Series 2 +
ArticleRating
3 +
Image
Vamp1.jpg +
InfoboxTemplate
Minifigure +
ShopDescription
“I’m supposed to drink WHAT?!”
… “I’m supposed to drink WHAT?!”<br />The Vampire may be a 200-year-old creature of nightmare and legend, but that doesn’t mean that he has to be uncivilized. He likes to read comic books with his pet bat, take long walks by the seaside (after sunset, of course), and throw huge parties in his big stone castle.He’s not a big fan of the more traditional vampire activities (though he has to admit that the flying is pretty cool), and much prefers a fruit smoothie to the classic beverage of choice. The local villagers might have been a little spooked at first, but now they’re very excited to have a friendly vampire in town!xcited to have a friendly vampire in town! +
Theme
Minifigures
Series 2 +
Title
Vampire +
Years
2010 +
Advertisement