Vampyre's Bride has a long, flowing hairpiece like that used by Elizabeth Swann, but in black. Her head is white and glow-in-the-dark, and is printed with a fanged mouth, pink lipstick, pink eyeshadow, and eyes with long eyelashes. One expression has a wicked grin, the other has an angered look with the fanged mouth open. She has a red dress piece with torn pink printing around the corset. Her torso is also printed with a torn red dress (as well as a necklace with a red jewel on it), and she has white hands.

A beaker piece, previously used in the 8804 Minifigures Series 4 theme by the Crazy Scientist can be found in the bride's hand.

The wife of Lord Vampyre, and long-suffering wife of her husband's devious ideas. Vampyre's Bride is a master of hexes and potions, hence her LEGO.com quote above. She lives in the castle with Lord Vampyre, and their Zombie Driver, and several Manbats. She is one of the three females in the theme, and one of the two females in the theme who are married, the other one being the Zombie Bride. The Vampyre Bride goes on a holiday with her husband to their haunted house. 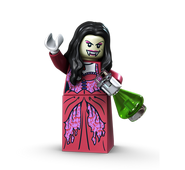 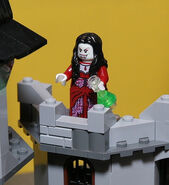 Vampyre's Bride in the Vampyre Castle

Vampyre's Bride with her husband and the Red Moonstone in bed.