"Armed! Dangerous! Ready for Battle! But first... we wait."
―Vardy

Vardy is the Leader of the Vulture Tribe, and appeared as a minifigure in summer of 2014. He is a very patient but powerful battler who enjoys waiting, and is one of the secondary antagonists of Season 3.

Vardy has a purple head with a green, pale leafy crown to signify that he is the king. On his torso there is torn flesh and icy bones surrounding a CHI harness, which is blocked by the bulky armor he wears, which covers most of his torso. However, a leafy bet similar to his crown is visible. He has a transparent blue arm meant to look like frozen ice, while his right arm is a normal gray color. His hips are a dark green with a leafy pattern, which goes down to his legs, which are lighter green. There is some torn flesh on his left leg, while there are some dark marks on his right. He has a knee pad with 3 bones on each leg and on each foot are dark grey claws.

He wields the Bonezythe, a scythe/spear that has icy powers, and he also wields an unnamed giant ice gun in 2015.

Patient but lethal, Vardy is the leader of the ancient Vulture tribe, and is close to Sir Fangar, leader of the Sabre Tooth tribe as well as all 3 Ice tribes. He was revived by Fangar along with many other warriors, and began his decent out of the now frozen crawler's cave with his vulture glider.

In Attack of the Ice Clan, he is very patient and is in no rush to fight. In the big fight between the good tribes and the ice tribes, he engages Cragger one on one. He froze the prince's tail with his scythe, but he didn't want to fight and patiently waited for him to tire himself out and freeze over. He says "Patience is my greatest weapon", which angers Cragger, who wanted him to fight, and did not see the purpose of his patience. Vardy simply ignored him and went to look at his crossword puzzle, while Cragger went so far as to ask Vardy to finish him. Eventually, Laval arrives and hits Vardy with his "greatest weapon" (his sword) then frees Cragger.

In The Call of Cavora Sir Fangar treats him like his second-in-command, despite previously giving that position to Stealthor. When the good tribes are winning, Fangar orders him to lead the Vultures VoomVoom and Vornon to attack in the skies as it was their last hope of winning. He first considers doing his usual strategy of waiting, but after more rocks fall and hit a vulture glider, he quickly agrees with Sir Fangar. He leads his troops up, but the Eagles fly above them with their eagle interceptors and hit Vardy, knocking him out of the sky. Later, when the good tribes lead then into the falling jungle, the flying vultures are once more, their last resort. While VoomVoom and Vornon are met with success, Vardy is immediatley crushed by a tree.

In Trial by Fire Vardy once more leads the jets in an attempt to gain the advantage against the beavers, who surprisingly gained an early upper hand by raising the frozen lake. The beavers, however use their creative and constructive genius to make spiked log crossbows, which shoots him out of the air. Later on, when the ice tribes are winning, Lagravis and the remaining beavers try to escape, but Vardy prevents them from leaving by threatening them with his ice pistol. When Laval, Cragger, and Eris come in with their new Fire CHI and gain the advantage, Vardy quickly retreats when they supply Lagravis with Fire CHI.

After retreating though the Croc swamp after their first loss in The Crescent, Vardy strategizes with Fangar, Stealthor, Strainor, and VoomVoom at the ice base about how to beat the new Fire CHI and the Pheonix. Vardy approves of Strainor's "art class" idea when Fangar said they should teach the Pheonix a lesson, but Fangar angrily disapproves that idea. When VoomVoom talks about how he's terrible at math, Vardy corrects his terrible counting. Later, when they are battling the Fire tribes and Laval defeats Fangar in a Speedor duel, Vardy comes in with his Speedor, which has icy wings on the side. When it seems like he and Mottrot were going to beat Laval, Cragger comes in on his Speedor and settles the score with the Vulture King. Once more, Vardy returns to his jet and gains the advantage, but despite victory seeming inevitable, the Pheonix comes in with their Blazing Bastiodon and destroys all chances they had of winning.

In The Collector, Vardy once more strategizes with Sir Fangar and Steathor. He approves of waiting for the counterattack, as this is his usual strategy. Vardy then begins to question what's in the special room that Fangar goes into, as he hears him talking to things. Stealthor evades the question and dispaches him. Later, he leads the underground attack against the "Pheonix child" with Stealthor, but all of the ice tribes are defeated by Skinnet's stink. Vardy retreats with Stealthor and Maula while the others suffer the stink. In his next attack, he finds the bears. Vardy planned to collect them as trophies for Fangar, and the entire tribe CHI'ed up to battle. But then, under Vardy's orders, they waited, for hours, with the CHI power still going. When they finally feel that the time is right, Laval and Flinx (their real target) drop off the bear legend beast, causing them to wait some more.

In The Snowball Effect, when Sir Fangar asks for Vardy, Stealthor informs him that he's still fighting the bears. However the story that Vardy told Stealthor makes Vardy sound strong and his troops engaged in an epic battle, while in fact, the bears were sleeping the entire time and the vultures hadn't even made a move. When the Bear Legend Beast lets out a fire roar that melts their ice, Vardy finally leads the atatck and effortlessley defeats the bears in seconds.

In The King Thing, Vardy aids Fangar in taking over the lion city. He sends VoomVoom and Vornon with their jets to deliver a message, but the jets explode into ice grenades, freezing the bridge. Later, as the ice tribes dominate the battle, Vardy and the Vutures use their jets to contain the legend beast with no problems at all. When victory seems inveitable, the Pheonix intervine and shoot Vardy out of the sky.

In A Very Slippery Slope, Stealthor puts Vardy in charge of the ice troops when he goes out on recon missions, unaware that their moving ice foretress is on a collapsable trap. Vardy tells him to "stay frosty", an obvious ice pun. Vardy later flies to stay out of the deep crevace that the foretress was falling on, but later goes back down to reunite with his comerades.

In The Artifact, Vardy first infroms Sir Fangar that his bride is ready while they are hidden deep underground. Fangar entrused him to plan his and Li'Ella's wedding, and he did so with style. Vardy made the wedding very visable, on top of spiral mountain, but also planned it very well. Speaking in a thick Italian accent for no apparent reason, he explained to Maula and Mottrot his wedding plans, and how they needed a great location and view, since this was a royal wedding. He claimed they needed glamor and greatness instead of having it in "some cave underground". When he made the cake, he made Li'Ella look extremley angry, because she would not put on any other face. He also asked Vornon and VoomVoom to use higly explosive ice plants because they looked good, which severley injured Vornon. However, the obvious location did hurt him, since Razar spotted him and the mammoths.

In The Pheonix has Landed, Vardy is still going along with his wedding traditions, decorating everything, making it look like a real wedding made of snow, giving Sir Fangar a tuxedo, and refusing to let him see Li'Ella because it's bad luck. He then starts the ceremony with the mammoths playing trumpets on their trunks, until Mugus starts playing a horrible tuba, in which case Vardy is ordered to stop. As Vardy is about to start the wedding, Eris attacks them in her jet, followed by Laval, Cragger, Worriz, and Rogon on their speedorz. An angered Vardy starts screaming at them how they ruined everything, but Cragger just runs him over, telling him "You may now kiss the dirt!"

In Wings of Fire, the ice hunters successfully attack the lion city and break the walls. Although they maintain a strong advantage, when the Pheonix and other tribes come into help, the battle becomes more evenly matched. Hoping to tip the tide, Sir Fangar reminds him and Maula about the fourth hunter tribe, but Vardy opposes because of their psychotic tendencies. Fangar orders him to awaken them anyway because of their immense power. He leaves with VoomVoom, and Vornon on their jets with bags of CHI, and he shows them the ice bears, the strongest creatures Chima has ever seen. They use the CHI to reawaken them, unintentionally awakening an inner power in the regular bear tribe as well.

Although Vardy's leg appeared during the Illumination that cured the hunters of their appearance and corruption so it can be assumed they did survive. It's this or that they were never attacked in the first place and that they told the ice bears where to go to fight. 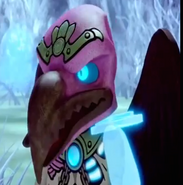 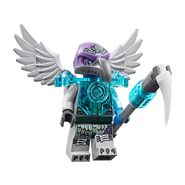 Vardy on his jet's detachable flyer 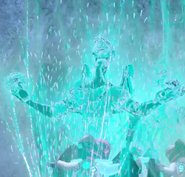