"We always love running into you, Spider-Man! "
―Venom to Spider-Man in LEGO Marvel Super Heroes

Venom is a Marvel Super Heroes minifigure released in 2013.

Venom is mainly black in color. His head is printed with a face that has large rugged white eyes and a large smile filled with pink gums and fanged teeth. His torso is the same as the black suited version of Spider-Man and is printed with muscles and a large spider symbol. There is back printing featuring the large white spider from the front and back muscles. He has a black part which is round with four clips (introduced in Toy Story 3) that attaches to his torso that holds four vines to represent his symbiotic tendrils.

A slight variation of him of appears in 10665 Spider-Man: Spider-Car Pursuit. The only noticeable change is his mouth is large and the teeth are closer, and the gums are missing.

Venom's appearance is LEGO Marvel Super Heroes is identical to its physical minifigure, and he crawls around. He has the abilities of Super Sense, which allows him to detect hidden objects, and web swing.

He was shown to climb a wall that the game hint said only Wolverine could climb.

He is also able to transform into a larger version of himself.

Venom is the combination of two beings. The first one is an alien symbiote that once joined Spider-Man in the form of a black suit, but was repelled by the latter to avoid assimilation. The other one is Eddie Brock, a news reporter who hated Spider-Man for exposing his fake news. When the symbiote found and joined Eddie, it gave him powers identical to Spider-Man's, plus knowledge about his secret identity so that the two could feed off of one-another's rage and hatred for Spider-Man. As Venom, they were obsessed with destroying Spider-Man for a long time, but in recent years they have become more of an anti-hero than a villain, even mending their relationship with the web-slinger.

Doc Ock was hired by Norman Osborn to capture Spider-Man and use his DNA to create super soldiers. Ock's first attempt was to send an Octobot to get a sample of Spider-Man's blood, which was completed successfully. The Venom symbiote was created after a failure to figure out Spider-Man's blood. The symbiote then broke free out of Ock's lab and went looking for Spider-Man. Harry Osborn, who was jealous of Peter's new friends (actually his teammates' alter-egos), decided to throw a huge party. The symbiote then crashed the party, jumped from host to host, which culminated into a huge battle on the roof tops, trying to get to Spider-Man while the team (Spider-Man, Nova, Iron Fist, Power Man, and White Tiger) fought the symbiote. Peter then decided to let the symbiote bond to him and used his electric webbing to shock it off. The symbiote then gained a more humanoid shape, the ability to speak properly, Spider-Man's powers, and named itself Venom. Spider-Man then electrocuted Venom and the symbiote is seemingly destroyed. Harry then captured a bit of the symbiote underneath a glass and Norman orders Doc Ock to make another Venom symbiote.

Harry then used the symbiote, controlled through a watch, to parade around as a hero (looking like the black suited version of Spider-Man) defeating Dragon Man and was praised by J. Jonah Jameson. Peter, sick with a cold, became jealous, and then worried when he found out that it is Harry. Harry told Peter that he had the symbiote under control, but it ended up controlling him. Peter fought Venom and threw him into a large screen, seemingly destroying Venom again. Doc Ock found out that Harry was Venom, but refused to tell Norman. The symbiote was shown to be in Harry's ear, hinting that part of the symbiote survived.

Venom resurfaced and attacked Batroc the Leaper, and beating him up badly. Spider-Man was then blamed for Venom's attack, as it looked like he did it. Peter knew Venom was back and using Harry as its host, forcing Peter into a dilemma on whether to reveal who Venom's identity to Nick Fury and his teammates or not. Nick ordered the team to finish Venom off, much to Peter's anger. Harry's neglecting father, Norman Osborn became Venom's target, and he attacked him twice at Oscorp before Spider-Man and his team intervened. Peter then revealed the secret to his teammates and tried to create an Anti-Venom cure at the school while his team tried to hold Venom off from reaching Spider-Man. The end result was Venom getting shocked by lightning on the school antenna, Spider-Man gave Harry the Anti-Venom, and Venom was once again seemingly destroyed. Norman delivered a sample of Harry's blood to Doc Ock to better create a new Venom and asked Ock if he knew Harry was Venom, which he denied.

Harry was later shown to have the symbiote still in his system, only showing itself at severe emotional times, such as after his father was turned into the Green Goblin. He was then brought onto the Helicarrier to be protected by S.H.I.E.L.D.. He attempted to save his father, believing he could talk the Goblin into sense. Goblin then shocked Harry, causing him to turn into Venom. Venom then fights with Spider-Man as Spider-Man tries to talk Harry out of it. Harry tried to free himself of the symbiote, with help from Spider-Man, and was successful. The Goblin then took the symbiote to find someone who was actually worthy of wearing it.

The Green Goblin returned, abducted Peter Parker (unaware he was Spider-Man) and injected him with a mixture of the Goblin serum, Harry's blood, and the Venom symbiote which resulted in turning Peter into Carnage. S.H.I.E.L.D. and his teammates had to protect Harry from Carnage. Harry realized Peter was Carnage and when it tried to attack him, he commanded it to stop, and it obeyed as Harry was the host for the Venom symbiote, but when he touched Carnage, the symbiote left Peter and attached itself back onto Harry to become Venom again. Venom then went after the Goblin and Spider-Man and Venom formed a truce to take him down. Spider-Man then had to talk sense into the both of them, and had to turn into Peter to talk sense into Harry. Harry managed to free himself form the symbiote and placed it in a beaker. The Goblin then grew suspicious of Peter and assumed Peter was Spider-Man, until the team (with Iron Fist filling in for Spider-Man to avoid suspicion) showed up and fought with the Goblin. The Venom symbiote ended up in S.H.I.E.L.D. custody while the Goblin escaped.

After the Goblin was captured and enroute to S.H.I.E.L.D.'s prison on the moon aboard Helicarrier, he released a sample of Venom which reunited with the one in S.H.I.E.L.D. custody. The symbiote the latched itself onto S.H.I.E.L.D. Agents, Agent Coulson, and Fury, and freed Goblin from his prison. Spider-Man and Ock formed a truce to develop an antidote and stop Goblin who had now bonded with the symbiote. Spider-Man dispersed a cure aboard the ship, curing the agents and turning Goblin back to Norman Osborn. Spider-Man then opened the hatch to outside and drove the symbiote into space.

In the game Venom is one of the super villains assembled by Dr. Doom and Loki to gather up the pieces of the Silver Surfer's surfboard.

Spider-Man, Hawkeye, and Black Widow pursued Green Goblin who had a Cosmic Brick at Oscorp. He escapes, but releases Venom, and he fought the heroes.

How to fight Venom

Dueling with Venom is quite tough. The villain will summon enemies endlessly, so you shouldn't bother with them - just focus on the main problem. The boss is immortal for some reason: you must weaken him first to strike a crushing blow. To do that, destroy all objectsstanding on the left side of the arena and build radio from the debris. When it is working, run towards Venom and punch him in the face. The first stage of fight is over now.

Wait for some time struggling with infinite group of minions - you need to survive long enough to see a computer appearing on the central wall. Use it to unlock huge flame thrower, then climb on it and shoot at Venom. When he's burning, you can hit him in a conventional way.

When the enemy is hardly alive, turn right and approach to the crane. Use spider sense to uncover two attachable points and yank them, scattering some bricks. Build a bellfrom the debris and switch your character into Hawkeye to shoot an arrow at the constructed object. After that approach to Venom and strike him with the final blow. 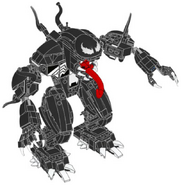 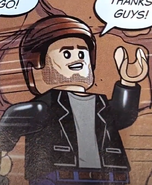 Venom without his tentacles at SDCC 2012 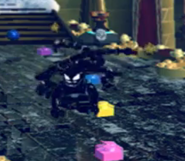 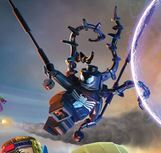 Venom on the villain cover for LEGO Marvel Super Heroes 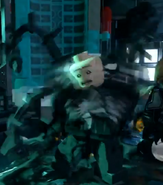 Eddie Brock inside of Venom 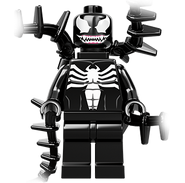 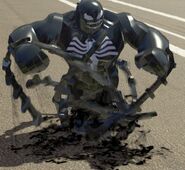 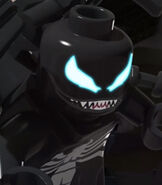 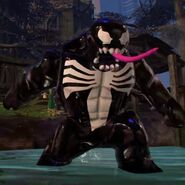 A cardboard cutout of Venom from LEGO Marvel Super Heroes