Vernon Dursley lives at Number 4 Privet Drive. To Harry, he is Uncle Vernon. He is married to Petunia Dursley née Evans and has a son named Dudley. He is a very large beefy man. He hates Harry, and all magic, and thus lives in both constant fear and disgust of him.

As a minifigure, Vernon has a brown mustache, sand-colored hair, brown pants, and a brown vest with a light blue shirt underneath. In the video game he has brown hair, same head as the minifigure (but flesh-colored) and a brown suit. 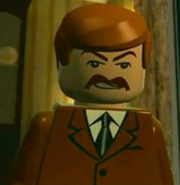