Vicki Vale is a Super Heroes minifigure who first appeared in LEGO Batman 2: DC Super Heroes. She made her physical debut in the 2019 set 76139 1989 Batmobile.

She has the same hairpiece as Elsa Schneider, but in orange and wears red lipstick. She wears tan coloured clothes with buttons. Her hips and legs are also plain tan.

In the comics, Vicki Vale is a reporter for the Gotham Gazette and is an occasional love interest of Bruce Wayne.

In LEGO Batman 2: DC Super Heroes, Vicki Vale is depicted as a television reporter for GCN, or Gotham City News. She is seen reporting the Man of the year award ceremony at the beginning of the game. Later in the game she is seen reporting about the masive break out of Arkham Asylum and villians are found everywhere in Gotham city. She reports on many of the events throughout the game, such as the fire at Ace Chemicals and the Joker Robot.

Vicki has a brief cameo in The Lego Batman Movie. Her appearance is based on Kim Basinger's portrayal in the 1989 film Batman. 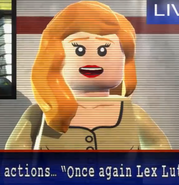 Reporting the Man of the Year ceremony