"There are monsters everywhere, and I’m just the Viking to fight them!"
―Viking

The Viking is a minifigure that was released in 2011, as a part of 8804 Minifigures Series 4. He comes with a battle axe and a dark brown shield.

He is not to be confused with the Viking that was released as part of 71027 Minifigures Series 20.

The Viking has a silver viking helmet and two gold horns. He has a printed face with eyes, orange bushy eyebrows, a beard, a mustache, sideburns, and an angry expression. He has a brown torso with yellow arms and hands. His torso has chain-mail markings, with a jacket and two belts over top it. The Viking's legs are dark tan and have fur padding at the middle of each leg. The Viking has a dark brown shield with markings of two serpents and two chains on it. The Viking also carries an axe, made up of a 3-stud-long axe handle and a pearl light grey axe head. 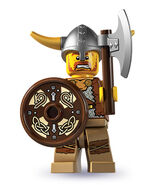 CG Image
Add a photo to this gallery

Retrieved from "https://brickipedia.fandom.com/wiki/Viking_(Minifigures)?oldid=1983062"
Community content is available under CC-BY-SA unless otherwise noted.