Viktor Krum is a minifigure from the Harry Potter theme, introduced in 2005.

Viktor's second variation depicts him with his transfigured shark head. He has light nougat legs, with a red hip area, presumably meant to represent swimming trunks. He has a tan torso, printed with the Durmstrang logo. His arms and hands are light nougat. His head, which is light nougat, and the same as that used by his previous variation, is covered by a large sand blue shark mask. This variation also features a flat-topped hairpiece, which can be changed out with the shark head.

In LEGO Harry Potter: Years 1-4, Viktor is almost identical to how he appeared in 4768 The Durmstrang Ship, except the flattop hairpiece from 4762 Rescue from the Merpeople (which was interchangeable with the shark head) was featured on him when he wasn't wearing his hat.

Viktor Krum was a student at the Durmstrang Institute, a school of magic, and a national Quidditch player. He participated with Harry Potter in the Triwizard Tournament. He also had a soft spot for Harry's friend, Hermione Granger. After the tournament, Krum became Hermione's pen-pal. 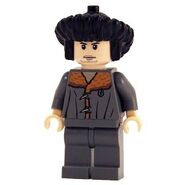 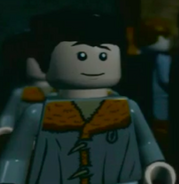 Krum in the video game 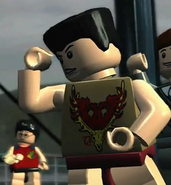 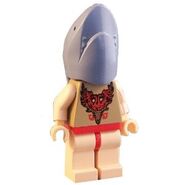 Krum with his shark head in the video game