Vincent Crabbe is a Harry Potter minifigure introduced in 2002.

The only minifigure of Crabbe released actually depicts Ron Weasley, impersonating him by means of Polyjuice potion. He has light grey legs, and a light grey torso printed with a Slytherin house badge (which is green with a sliver snake printed on it), a green and silver tie, green and silver lining, a white collar, and wrinkles. He has light grey arms, and yellow hands. His yellow face is printed on one side with a grimacing expression, and dull black eyes. On the other side of his head is Ron Weasley's head, printed with a whimsical expression. He has flat black hair, and wears a black cloak printed with stars.

In LEGO Harry Potter: Years 1-4, Vincent is almost identical to his physical variation. The only differences between the to are his flesh-toned skin, and the fact that his robes were recoloured to dark-grey.

Vincent Crabbe was a friend of Draco Malfoy's. In his second year, he was knocked out by a drugged cake, and impersonated by Ron Weasley, with the use of a Polyjuice Potion.

Later, in his seventh year at Hogwarts, he accidentally killed himself in the Room of Requirement when he used a fire spell called FiendFyre. In the process he also destroyed a Horcrux. 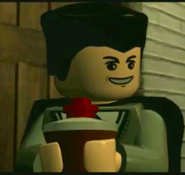 Crabbe in the video game