Vinnie Pappalardo is one of the characters in the video game LEGO City Undercover.

He has black hair with a quiff, greying in some areas. He has a striped suit and a Brooklyn accent.

When Chase McCain goes undercover, acting like a criminal to get in with the gangs, Vinnie hires him and instructs him to steal objects of value such as cars, equipment and a large emerald to prove his loyalty. He is seen giving McCain missions much like Ellie Phillips and Marion Dunby do. Vinnie owns a very popular ice cream parlor. 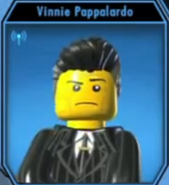 Vinnie on the gamepad
Add a photo to this gallery

Retrieved from "https://brickipedia.fandom.com/wiki/Vinnie_Pappalardo?oldid=1410072"
Community content is available under CC-BY-SA unless otherwise noted.