“I know you can't trust me but we need to go!”
―Vision to Thor, Avengers: Age of Ultron

The Vision is a LEGO Marvel Super Heroes minifigure first released in 2015.

Vision is an android that was created by Ultron to destroy the Avengers. He was first named by Wasp who considered him a frightening vision. Eventually, Vision learned to appreciate humanity, betrayed Ultron and joined the Avengers. He has the ability to phase through solid objects. He married Scarlet Witch.

Vision was an android who possessed a synthetic body made from vibranium created by Ultron with Helen Cho's help, using the powerful artifact known as the Mind Stone to bring Vision to life. Originally conceived as the perfect form for Ultron, the body was taken by the Avengers before Tony Stark and Bruce Banner proceeded to upload the remnants of Stark's personal A.I. J.A.R.V.I.S. into it. Upon his birth, Vision declared he was the hybrid of both Ultron and J.A.R.V.I.S., one that would fight with them to protect humanity. Vision had then joined with the Avengers in the Battle of Sokovia, using his powers to prevent Ultron from transferring his consciousness to the internet, and allowing the Avengers to successfully put an end to Ultron.

In the wake of the Ultron Offensive, Vision became an official member of the Avengers under Captain America's leadership. However, tension between these Avengers rose following the creation of the Sokovia Accords, as Vision saw the equations regarding the number of threats related to their actions as the reason for them to allow oversight of their actions. This led to a conflict, as Captain America had gone against the Sokovia Accords in order to protect the Winter Soldier, who was being framed by Helmut Zemo, forcing Vision to side with Iron Man in order to then bring Captain America and his allies to justice. During their conflict, Vision was involved in a battle which had concluded when Vision inadvertently shot War Machine out of the sky, while the Avengers were torn apart by their conflict.

Feeling guilt over paralyzing War Machine, Vision, and Scarlet Witch had then quietly left the Avengers in order to rebuild a relationship. However, Vision was soon attacked by the Black Order, who were attempting to steal the Mind Stone from his head under the orders from Thanos. Having been rescued his allies, Vision agreed to have the Mind Stone removed from his head and destroyed, as they travelled into Wakanda to recruit the help of Shuri. Their attempts were unsuccessfully, as the Black Order attacked Wakanda, while Corvus Glaive was able to force the wounded Vision into the open. As Thanos arrived, Vision had convinced the devastated Scarlet Witch to destroy the Mind Stone, killing him, only for Thanos to use the Time Stone to then resurrect Vision and rip the stone from his head, killing him for a second time as Thanos claimed his victory.

Vision would later be recreated twice in two different ways. One by a grief stricken Wanda, who accidentally recreated Vision while trapping the town of Westview in a sitcom where him, Wanda, and sons Billy and Tommy lived in surburbia while keeping their powers and Vision's appearance away from their neighbors. However, Vision knew there was something wrong, due to the neighbors attitudes and odd occurrences that were happening around them but couldn't remember anything before living with Wanda, driving a wedge between Wanda and him, since Wanda didn't want to lose Vision for a third time, while Vision was worried for the safety of the citizens. Vision would later find out what happened to him from Darcy Lewis, and try to reconcile with Wanda.

Meanwhile, S.W.O.R.D. director Tyler Hayward, who oversaw the investigation of Westview, used Vision's carcass and a bit of Wanda's Chaos Magic to create White Vision in order to kill Wanda and "save" Westview.

Both Visions clashed when White Vision came to kill Wanda while she was dealing with Agatha Harkness, their neighbor who wanted Wanda's magic. Vision came to save Wanda reconciling with her before fighting White Vision. He would later help White Vision by restoring his memories that were kept from him, causing White Vision to leave the battle. Vision, Billy, Tommy, and Monica Rambeau would help Wanda fight Agatha and an invading S.W.O.R.D. During which allowed Wanda to become the Scarlet Witch and defeat Harkness while the S.W.O.R.D. agents stood down after Hayward's colors were shown as he was arrested. Vision, Wanda, Billy, and Tommy would later head home as Wanda ended her hex over Westview causing Vision to vanish and Billy and Tommy to end up somewhere unknown. But Vision promised Wanda that he'll see her again in one form or another. 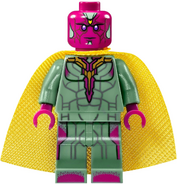 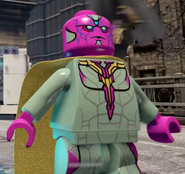 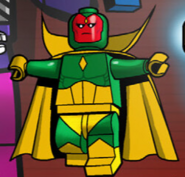