Vitruvius is a minifigure who one of the two tritagonists (the other being Batman) in The LEGO Movie. He brings together all the Master Builders for a meeting in Cloud Cuckoo Land, in which he tells them that an unstoppable force is coming that could "end the world as we know it". He plans for Emmet to stop this force. In the movie, he is voiced by Morgan Freeman while Josh Robert Thompson voices him in the video game adaption.

"I liked Emmet before it was cool."
―Vitruvius In The LEGO Movie

Vitruvius was first seen in a temple guarding the Kragle from Lord Business, but failed and lost his eyesight afterwards. He warns Lord Business of the special.

Later, he was hiding in The Old West as a piano player, and soon guided Emmet, Wyldstyle and Batman to Cloud Cuckoo Land, where they met Unikitty and Benny. After the place was destroyed by Bad Cop and his forces, the gang was rescued by MetalBeard and soon operated a plan to infiltrate the Octan Tower.

Later on, Vitruvius was decapitated by Lord Business with a penny. In his last dying words, he tells Emmet the prophecy was not true and it was made up and dies before he can finish talking. With Emmet strapped on to a battery, Vitruvius returns as a ghost to tell Emmet that anything is possible as long as he believes.

Later on, after Emmet saves the universe, the Master Builders including Ghost Vitruvius celebrate Emmet's victory and Ghost Vitruvius then says "I liked Emmet before he was cool."

In The LEGO Movie 2: The Second Part he accidentally gets knocked aside by MetalBeard.

"He is coming. Cover your butt."
―Vitruvius
"One day, a talented lass or fellow, a special one with face of yellow, will make the Piece of Resistance found from its hiding refuge underground, and with a noble army at the helm, this Master Builder will thwart the Kragle and save the realm, and be the greatest, most interesting, most important person of all times. All this is true, because it rhymes."
―Vitruvius, making up the Prophecy of the Special
"We are entering your mind."
―Vitruvius to Emmet
"Ah, you see, Emmet? A corrupted spirit is no match for the purity of imagina--."
―Vitruvius, before being beheaded.
"Vitruvius: My sweet Emmet. Come closer. You must know something about the prophecy.
Emmet: I know, I'm doing my best, but--.
Vitruvius: The prophecy... I made it up.
Emmet: What?
Vitruvius: I made it up. It's not true.
Emmet: But that means I'm just... I'm not the Special?
Vitruvius: You must listen, for what I'm about to tell you, will change the course of history...Bleagh.

―Vitruvius, revealing the Prophecy to be fake, and last words.
"Emmet, you didn't let me finish, because I died."
―Vitruvius
"You're going to have to write that all down because I'm not going to remember any of it, but here we go!"
―Vitruvius
"Emmet: But how can I just decide to believe that I'm special...when I'm not?
Vitruvius: Because the world depends on it."
―Emmet and Vitruvius

Vitruvius in a movie poster 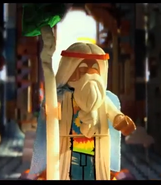 Speaking to the Master Builders

With Emmet, Wyldstyle and Batman in the Batwing

Vitruvius jumps onto a glider being piloted by Emmet

Vitruvius talking to the Master Builders 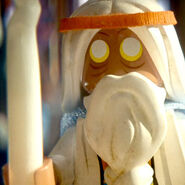 Vitruvius with Wyldstyle and Emmet

Young Vitruvius (before he was blinded) 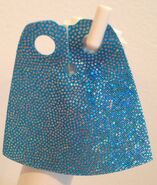 Deutsch Français
Community content is available under CC-BY-SA unless otherwise noted.
... more about "Vitruvius"
RDF feed
Accessories
Staff +
Appearances
70809 Lord Business' Evil Lair
70810 MetalBeard's Sea Cow
70818 Double-Decker Couch
The LEGO Movie +
ArticleRating
4 +
Image
Vitruvius front.JPG +
Img1
Vitruvius front.JPG +, TLM_Vitruvius2.png +  and Vitrivius.jpg +
Img2
IMG_0456.jpg +, Ghost_of_Vitruvius.png +  and Vitruvius-Ghost.png +
Img3
14224876390 c741b7da47 n.jpg +, VitruviusTheAwesome.jpg +  and Notblind_vitruvius.jpg +
Img4
70818Vitruvius.PNG +
InfoboxTemplate
Minifigure +
ShopDescription
An ancient and heroic wizard who prophesiz … An ancient and heroic wizard who prophesizes that a “Special” will defeat Lord Business and become the greatest LEGO Master Builder of all. He tries to teach Emmet that the key to true building is to believe in yourself and follow your own set of instructions inside your head. own set of instructions inside your head. +
Theme
The LEGO Movie +
Title
Vitruvius +
Txt1
Old +
Txt2
Old (Pants and no cape) +  and Ghost +
Txt3
Young +
Txt4
Ghost +
Years
2014 +
Advertisement