Vixen, also known as Mari McCabe, is a Super Heroes minifigure who appears in LEGO Batman 2: DC Super Heroes. She was originally available in handheld versions of the game, though some of her parts are available for use in the character creator on console versions. However, she made her console debut as a DLC character in LEGO Batman 3: Beyond Gotham.

In the portable version, Vixen has Nightwing's hair piece and Wonder Woman's head, but in brown with bright red lipstick. She has a yellow torso detailed with a vest, her Tantu Totem necklace and a belt, along with yellow hips and legs. She also has brown arms and wears yellow gloves. Her legs are reused from Hawkgirl.

Mari McCabe is a heroine who can mimic the abilities of Earth animals by using a magic relic she inherited from her ancestors, such as using the strength of a bull elephant or using the speed of a cheetah. She can also summon multiple animals by communicating with them just like Aquaman.

In portable versions of LEGO Batman 2: DC Super Heroes, she is unlocked for purchase after finding her minikit in Assault the VTOL and costs 80,000 studs. Some of her parts also appear on consoles in the character creator. She is available on console versions if you have the game files.

Vixen appeared as part of the free Heroines and Villainess DLC pack. 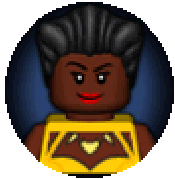