Vladek was the main antagonist in the 2004–2006 Knights' Kingdom II series.

Vladek has a dark visage, with burning embers for eyes and a mouth set in a permanent grimace. When his Vladmask is not on, he can cause fear in even the most stalwart of the Hero Knights. His emblem is the scorpion, and it is set into his shield for all to know. Vladek's sword is of the darkest coal, sinister and deadly. Vladek is an oddity among the Knights’ Kingdom series kits, in that he is the one of the very few figures to have only one movable arm via a dial on their back. This is supposedly because of his skill with the sword, and disdain of the shield. Vladek's sword is perfectly capable of deflecting all arms that can be brought to bear, and it is rumored he can split an arrow in mid air. In 2006, Vladek gained new black and silver armour, a red cape, and a Sorcerer's Sword which is capable of deflecting boulders and creating things out of ruins.

He was the advisor to King Mathias, but he put him in a dungeon and claimed the King had gone missing, and that a tournament would be held to determine the new king. He entered, and planned to use the power of the Book of Morcia to win and become king. However, the four Hero Knights found Mathias and defeated Vladek. Some time after, Vladek fled, and found himself in the lost kingdom of Ankoria, where he regained power by creating the Vladmask, and took over the kingdom. It was here he adopted the title of "Lord Vladek." He threated to use the Vladmask to destroy Morcia, but Sir Jayko destroyed the Vladmask and stopped him. He is the leader of the Rogue Knights and the Shadow Knights. Two of his subordinates are Dracus, a warlord, and Karzon, a weapons master. He was defeated twice by King Jayko, before being captured by him in 2006, although the details are unknown.

In The LEGO Movie, there is a location called Vladek's Realm when Wyldstyle's flashback involving the Master Builders showed a map in Lord Business' board room that listed all the known locations in the Lego Universe. 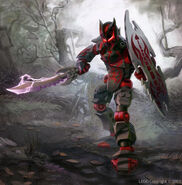 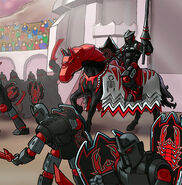 Vladek and his army

Vladek and Sir Jayko face off