Void is a Marvel Super Heroes minifigure that appears in LEGO Marvel's Avengers.

The Void is the black and destructive counterforce and negative aspects of arguably the most powerful of all heroes, the Sentry. It is more of a force than a person but can take any shape it chooses. When talking to and teasing Sentry, it normally uses human form. It is capable of destroying the Earth, if not the entire universe. Robert fights a constant inner battle to keep the Void at bay as it comes into being every time he uses his powers, and is his eternal nemesis born in his own psyche. 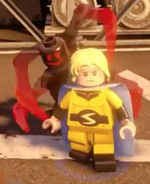 Sentry and Void
Add a photo to this gallery

Retrieved from "https://brickipedia.fandom.com/wiki/Void?oldid=1890814"
Community content is available under CC-BY-SA unless otherwise noted.