Brickipedia
Register
Don't have an account?
Sign In
Advertisement
in: Class 4 articles, Animals, Minifigures introduced in 2010,
and 3 more
English

A Wampa is a big figure introduced in the Classic Star Wars line. Wampas live on the ice planet Hoth. One of the Wampa figures unique features is that it can pickup and hold a minifigure in it's left hand, a similar feature used again on the Hulk big figure.

Wampa ice creatures were carnivorous predatory reptomammals indigenous to the Outer Rim Territories ice planet Hoth. The bipedal beasts stood over two meters in height with shaggy white fur constantly stained by the blood and guts of slaughtered prey. Wampas were armed with jagged yellow teeth and deadly claws. Primarily solitary hunters, wampas occasionally hunted in packs, preferring to ambush their prey from the camouflage of Hoth's snow banks and blizzards. Stunned victims were carried back to the creatures' lairs, typically large ice caves, where the wampas ate at their leisure. The planet's omnivorous tauntauns formed the bulk of the wampas' prey, although they would attack anything they encountered. The Alliance to Restore the Republic's Echo Base on Hoth came under constant wampa assaults in 3 ABY.

While rarely seen away from their remote homeworld, wampas were known to have participated in illegal gladiatorial combat venues. They were highly valued among big game hunters for the challenge that came with hunting the creatures, as well as for their pelts, stuffed heads, and other miscellaneous souvenirs that commanded high prices on the black market. Wampas were later protected under legislation to prevent endangered species from falling into extinction by the Galactic Federation of Free Alliances. 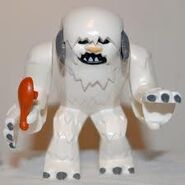 Wampa as it appears in LEGO Star Wars II: The Original Trilogy 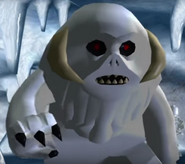 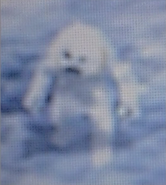 A Wampa as a playable character in LEGO Star Wars

A Wampa holding both Luke Skywalker and a chicken leg 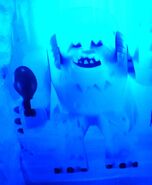