"Iron Patriot" redirects here. You may be looking for the Ultrabuild combiner model.

Not to be confused with 76124 War Machine Buster

"Boom! You looking for this?"
―War Machine in LEGO Marvel's Avengers

War Machine has the same helmet as Iron Man in different colours, with medium stone grey in place of red and light metallic silver in place of the gold, which is the colour scheme for the rest of the suit. Underneath the helmet is a brown head printed with cheek bones, lines under the eyes, and a dual expression (neutral and angry). The rest of the body is medium stone grey. The torso is printed on the front and back: the front features the arc reactor in an rounded rectangle shape with red in it and under that is FF 446, the chest has light grey near the abdomen area and on each side of it is written Danger on the connectors, and on the upper right chest plate near the arm is 002. The back features the back of the armour, with a blue star on the right shoulder blade and arrows on the left. The legs are printed with the pelvis area and the knee pads, which are light grey. Part of the boot is printed on the toes. On his left knee pad there is a five-pointed star.

Iron Patriot features the same helmet in blue, and the visor is silver with a little red design on the top of the visor. The head is the same as the original. The shoulder gun design is the same but in black, as is the printing, but recoloured in dark red, white, and dark blue. The hands are dark red, while the rest of the body is dark blue. The arc reactor has a star design around it and is the same rectangle arc reactor as seen on the original War Machine minifigure. Despite the similar design of the minifigure, the FF 446 is missing under the the reactor.

Colonel James Rupert "Rhodey" Rhodes is an officer with the United States Air Force and liaison between the military in the Department of Acquisitions and Stark Industries, where he became close friends with Tony Stark. When Stark had been kidnapped by the Ten Rings, Rhodes personally led a mission to rescue his best friend. However, upon their return, Rhodes saw Stark moving away from developing his weapons for the military and soon discovered that he was instead focusing on becoming a hero known as Iron Man. Despite all of his fears for his friend's safety, Rhodes still joined Iron Man in bringing down Obadiah Stane's schemes, while trying to keep Stark's secrets, only for Stark to reveal them to the media himself.

With Iron Man's identity known, Rhodes found himself under pressure from the United States Congress and the military to take possession of the armor for himself, something that he was against. However, as Stark's reckless behavior got even worse, Rhodes had no choice but to take the Mark II before handing it over to the military, with Justin Hammer upgrading it with his new weapons to rebrand Rhodes as War Machine. However, just as War Machine was being presented to the world, Ivan Vanko returned and attacked the Stark Expo with an army of Hammer Drones, as War Machine teamed up with Iron Man to bring him down, resulting in Rhodes keeping the armor for himself, despite Stark's continued objections.

With his newest armor, Rhodes took on the identity of the Iron Patriot and worked directly for President Matthew Ellis, with a mission to track down the Mandarin. However, Rhodes had soon discovered that the Mandarin was in fact a ruse created by Aldrich Killian by hiring actor Trevor Slattery to portray the role, as Killian managed to capture Rhodes and steal the Iron Patriot Armor, as Killian's henchman, Eric Savin, then used it to kidnap President Ellis as part of his ongoing Mandarin ruse. Rhodes managed to free himself and teamed up with Stark to defeat Killian's army of Extremis Soldiers and save President Ellis before Killian could publicly execute him, as Rhodes also uncovered Vice President Rodriguez's role in Killian's plan.

As War Machine, Rhodes continued serving his country and assisted the Avengers with defeating Ultron, as War Machine played a key role in ensuring that the people of Sokovia were rescued before Ultron could cause mass extinction. However, Rhodes soon found himself in conflict with the Avengers as the debate over the Sokovia Accords led to Captain America and Iron Man disagreeing and War Machine choosing to side with the government in support of the Accords. As the conflict worsened, War Machine clashed with Captain America's allies while they tried to protect the Winter Soldier and expose the plans of Helmut Zemo, only for War Machine to be crippled as he had been inadvertently shot out of the sky by Vision.

Having been given leg braces by Tony Stark to help him walk again, Rhodes had became disillusioned by the government and decided to disobey Thaddeus Ross' orders and instead assisted Steve Rogers as they had learned of the impending invasion of the Mad Titan, Thanos and his Black Order. Once they traveled to Wakanda in order to protect the Mind Stone from Thanos, War Machine fought alongside his allies in their attempts to hold back the Black Order and their own army of Outriders. However, as Thanos arrived himself, War Machine and the others were unable to defeat him as Thanos took the Mind Stone and caused the Snap, as War Machine had then watched on helplessly while trillions of lives were erased.

Determined to undo Thanos' actions, War Machine joined the Avengers to the Garden, as they discovered that Thanos had destroyed the Infinity Stones, prompting Thor to behead the Mad Titan. However, by 2023, the Avengers learned to travel through time and War Machine joined Nebula on a mission to take the Power Stone from Morag in 2014. Succeeding in the mission, the Avengers reversed the Snap, before then being attacked by a past version of Thanos and his entire armies of the Chitauri and Outriders. War Machine then joined his fellow heroes in battling Thanos until Tony Stark sacrificed his life to finally eliminate Thanos, as Rhodes stayed by his best friend's side during his final moments before attending his funeral. 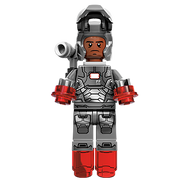 Visor up with alternate face