Warrior is a Rama alien minifigure from the LEGO Racers theme. Warrior appeared in the video game LEGO Racers 2 as a CPU racer, and hosted the bonus games on Xalax.

Warrior is the bravest of the Ramas. Nothing can stop him from advancing in-race no matter how hard the task.

Warrior on the logo of Xalax 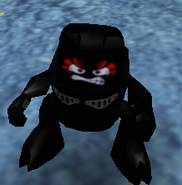