Watto (wat-toe) was a Toydarian junkyard dealer who once owned Anakin Skywalker and his mother Shmi as slaves, until he was freed when he won the Mos Espa Podrace. A LEGO minifigure of him was first introduced in 2001, he has appeared in two video games since, before having a re-design in 2011.

He owned a small junk parts shop in the town of Mos Espa on Tatooine. Every podracer pilot on Tatooine - and beyond - knew about his shop. There, customers could purchase all sorts of parts to upgrade their podracer or any other vehicle, although one of Watto's policies stated that he would not accept Republic credits.

Also, his species is not affected by Jedi mind tricks (as Qui-Gon Jinn tried to use a Force trick on him in Star Wars Episode I: The Phantom Menace, to no avail).

The physical minifigure of Watto was later re-designed in 2011, featured in 7962 Anakin's and Sebulba's Podracers.

Watto in his shop during LEGO Star Wars: The Complete Saga. 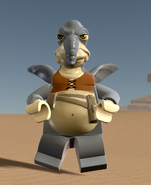