Wedge Antilles is a Star Wars minifigure that first appeared in 2006 in the set 6212 X-Wing Fighter.

Wedge's helmet design is exclusive to the X-Wing Fighter and the X-Wing Co-Pack. He has a basic "smiley face" in flesh tones. Wedge has orange legs with a grey leg joint and an orange torso piece with black hands and printing to depict a Rebel flight suit, the same suit that other Rebel Pilots used.

Wedge Antilles was a young male Human who joined the Rebel Alliance and took part in the battles of Yavin, Hoth, and Endor, helping to destroy the first and second Death Stars. Prior to joining the alliance he was a top level cadet at the Imperial Skystrike Academy, but soon learned the true nature of the Imperial menace and sought to escape the ranks. The opportunity came in the form of Sabine Wren, who helped him and fellow cadet Derek "Hobbie" Klivian to escape and join the Rebel alliance, though in the process their friend Rake perished. Wedge would go on to fight under the command of Hera Syndulla, flying several missions including in action against the fleet of Grand Admiral Thrawn. 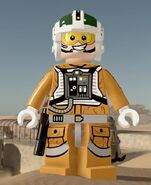