The Weeping Angel is a minifigure that appears in 21304 Doctor Who.

The Weeping Angel is almost completely grey, with dark grey and black details. It uses the braided "queen" hairpiece. Its normal face shows a calm expression, but the other side shows it in a monstrous scowl, with fangs and blank eyes. Its body is simply printed with a Greek-style dress. It uses the Eagle Tribe wings from Legends of Chima, attached to a clear neck bracket.

According to The Doctor, the Weeping Angels "are as old as the universe (or very nearly), but no one really knows where they come from." He also describes them as "the deadliest, most powerful, most malevolent life-form ever produced." Weeping Angels are unusual as predators in that they neither kill nor directly parasitize their prey. Their usual mode of feeding is to make use of time paradoxes - with a single touch, a Weeping Angel can send a person into the past to a point before his/her own birth, and can then feed off the "potential energy" of the years which that victim would have lived in the present. The Doctor describes the Angels as "the only psychopaths in the universe to kill you nicely" because their victims are otherwise uninjured and may live out their lifespans in the past.

Weeping Angels are an alien race, appearing as winged humanoids wearing sleeveless robes. Their signature trait is their unique defense mechanism. Whenever they are being observed, Weeping Angels are quantum-locked in a stone, statue-like form. However, once they are out of sight, even for a split second, they can move in rapid speeds. They become more monstrous in appearance as they close in on prey.

The only way to defeat a Weeping Angel is to get them to stare at each other, as even another Angel's stare can quantum-lock another. This is why they cover their faces and get their "Weeping" appearance.

The Weeping Angel while it is a attacking in Lego Dimensions. 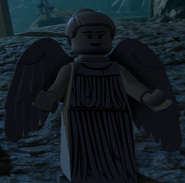 Add a photo to this gallery
Retrieved from "https://brickipedia.fandom.com/wiki/Weeping_Angel?oldid=1978330"
Community content is available under CC-BY-SA unless otherwise noted.