Wheatley is a non-playable deuteragonist in LEGO Dimensions from the Portal 2 franchise.

Wheatley was designed to be an Intelligence Dampening Sphere, one of the cores to be attached on GLaDOS in order to "generate an endless stream of terrible ideas" as a means of delay or stop her unpredictable actions on the Enrichment Center. Although it was never explained, Wheatley was disconnected from her and given other jobs. Sometime before GLaDOS killed off the entire staff in the Portal 2: Lab Rat comic using neutrotoxin, Wheatley had worked alongside staffs before he was put into storage with other cores seen at the end of Portal. After a few years, though under unknown circumstances, he was put into deactivation along with many other personality cores and kept in storage. Thanks to Chell's havoc on the Enrichment Center via the destruction of GLaDOS at the conclusion of Portal, Wheatley and the rest of the cores were reactivated in order to maintain the facility. Ironically, this backfired as many cores (except Wheatley and the corrupted cores seen at the end of the game) appear to have been either killed off, gone insane, or ran low on power. Prior to the events of Portal 2, Wheatley took charge of maintaining the Extended Relaxation Center - which houses test subjects in long-term cryogenic stasis before and after they are put through the testing courses. However, what he has done to actually manage the entire wing remains unmentioned. It was only until many centuries later that Wheatley decided to escape the facility. To accomplish this, he attempted to gather help from any remaining test subject that managed to last centuries after running out of cryogenic supply. Luckily for him, Chell was one of them if not the only one that lasted. He then went with Chell to escape the facility after breaking out of the Extended Relaxation Center, only for Chell to accidentally awaken GlaDOS, who had not been destroyed, who then captured Chell and subjected her to testing, although Wheatley escaped and tried to break Chell out of the testing chambers, and after he did then went with Chell to confront GlaDOS. He then replaced GlaDOS and put her in a potato battery. He quickly became corrupted with his new power though, and imprisoned Chell and GlaDOS inside the old Aperture Science Facility. They then climbed out, and confronted him, replacing him with GlaDOS and firing him into space via the portal gun, where he then felt remorse for betraying Chell. 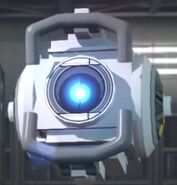 Add a photo to this gallery
Retrieved from "https://brickipedia.fandom.com/wiki/Wheatley?oldid=1988959"
Community content is available under CC-BY-SA unless otherwise noted.