Brickipedia
Register
Don't have an account?
Sign In
Advertisement
in: Unrated articles, Video game only minifigures, Marvel Minifigures,
and 2 more

White Wolf is a Marvel Super Heroes minifigure introduced in 2016.

Hunter the White Wolf is a Marvel Comics character. He is the estranged, adopted brother of Black Panther. He is head of the Hatut Zeraze.

When a plane crashes in the remote African nation of Wakanda, a husband and wife discover a Caucasian infant boy whose parents died in the crash. The husband fears the child and wants him killed, while the wife wants the child for herself. Bringing the infant to their liege, King T’Chaka, the monarch astounds his people by adopting the child as his son. T’Chaka names his son Hunter, and he grows to become a dutiful prince, learning combat and hunting at his father’s side. He achieves mastery of deadly combat at the age of six.

During Hunter’s adolescence, T’Chaka’s wife, N’Yami, dies giving birth to their son, T’Challa, who later becomes the Black Panther. Hunter resents T’Challa for N’Yami’s death and soon realizes T’Challa was T’Chaka’s favorite and heir apparent. Hunter then befriends T’Chaka’s new wife, Ramonda, a South African who sympathizes with his status as an outsider.

When Hunter enters adulthood, T’Chaka appoints him head of the Hatut Zeraze, AKA the Dogs of War, Wakanda’s secret police and Hunter takes the codename, White Wolf.

Hunter is an expert espionage agent, interrogation officer, tactician, hunter, and tracker. Hunter has extensive experience in armed and unarmed combat, particularly with knives and firearms.

As the White Wolf, Hunter wears a Vibranium-weave uniform that absorbs any impacts’ kinetic force, rendering him bulletproof. His gloves include claws, which he uses to scale most surfaces, and his the sole of his boots contain Vibranium alloy pads that can vibrate at various frequencies, allowing him to run up the sides of buildings, land soundlessly and without injury from heights of 50’, walk on water, or slice through metal. His uniform is fitted with cloaking technology, concealing it as normal clothes. He occasionally wields machine guns or a sniper rifle 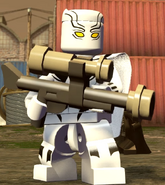