The Wicked Witch of the West

The Wicked Witch of the West is a playable minifigure in LEGO Dimensions.

She is voiced by Rikki Lindholme in The LEGO Batman Movie, but was not credited for the role.

The Wizard of Oz

The Wicked Witch of the West was one of the four (two later) Witches in the Kingdom of Oz. When Dorothy Gale's house landed on her wicked sister and the Good Witch of the North gave Dorothy some magic slippers, the Wicked Witch menaced Dorothy and her companions while they journied to the Emerald City. When they arrived, they were tasked by the Wizard to bring back the Witch's broom in order to earn his help. While they went to her castle, they were captured by her winged monkeys. When the Scarecrow set himself on fire, Dorothy tossed a bucket of water, which also hit the Wicked Witch and caused her to melt.

The Wicked Witch of the West and her Flying Monkey army were among the inmates of the Phantom Zone and were among those released by The Joker and Harley Quinn.

Just as mean as she is green, the Wicked Witch of the West is a broom-flying menace who wants nothing less than total power and control over the magical land of Oz … at least until she was locked away in the Phantom Zone with her fellow ultimate villains. With an arsenal of powerful magic spells and an army of winged monkeys at her command, this sinister sorceress is a real threat to the good people of Gotham City.

Bat-Fact: Just like Catwoman™, she really hates getting wet. 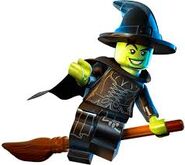 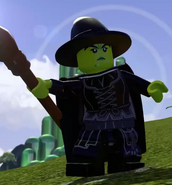 The Wicked Witch with a army of Flying Monkeys.
Add a photo to this gallery

Retrieved from "https://brickipedia.fandom.com/wiki/Wicked_Witch_of_the_West?oldid=1994724"
Community content is available under CC-BY-SA unless otherwise noted.