Wicket W. Warrick is a Star Wars minifigure based off the character from the Star Wars movies with the same name. Wicket was an Ewok native to the planet of Endor and fought in the Battle of Endor. He has appeared in three sets and in two LEGO Star Wars video games.

Wicket Wystri Warrick was an Ewok from the forest moon of Endor. He was an Ewok scout and warrior and is close friends with Paploo. He has brown fur and wears a light brown hood. Wicket played an important role in the Battle of Endor. Wicket met Princess Leia after she got separated from the rest of the Rebel Strike Team. Wicket brought her to the village and after the two groups, the Ewoks and Rebels, made peace, they decided to fight the Empire. While the Battle of Endor progressed, Wicket fought off some Imperial's until he hit himself in the head by accident. In the end, the rebels destroyed the shield bunker protecting the Death Star II, thus giving the rebel space forces a chance to destroy the Death Star. The Rebels succeeded.

Wicket has three variations and has one video game variation. 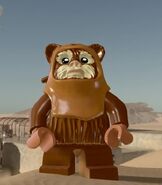