Brickipedia
Register
Don't have an account?
Sign In
Advertisement
in: Class 3 articles, Minifigures introduced in 1997, Fright Knights minifigures,
and 3 more

Willa the Witch, also known by various other names including Hubble Bubble, Izralda, and Hylia, is a minifigure who has appears in several Fright Knights sets.

Willa the Witch is the first minifigure to wear a black version of the Wizard's Hat first introduced with Majisto. She wears a black dress, with her legs represented with a 2x2x2 slope brick. Both her torso and her dress feature printing, including a yellow brooch with a spider pattern. She wears a red cloth cape, which also features a black spider pattern on the back. Her face is printed with black hair and eyebrows, and a wide-open mouth showing a single tooth on her lower jaw.

As a playable racer in LEGO Racers, Willa has standard minifigure legs, rather than the dress that she has as a minifigure, and does not wear a cape. Her appearance as a stage hazard retains both the dress and the cape.

Much like the Adventurers characters, Willa the Witch has had a variety of different names in different sources and regions. Her most well-known name, Willa the Witch, originates from the North American publications of LEGO Mania Magazine[1] and has been used in both of her video game appearances in the English language.

In Germany, the March/April 1997 issue of World Club Magazine gives two different names for the character. The photo comic Graf Fledermaus Ist Wütend: Wer Hat Meine Tapferen Ritter Gekidnappt? names her Buta.[4] A few pages later, the Time Cruisers comic names her Izralda,[5] and this name continues to be used for the next three issues as the comic continues. However, in the final issue of 1997, the photo comic Graf Fledermaus kämpft mit dem Zauberer und seinem teuflischen Drachen! goes back to using Buta as her name.[6] Game cards that came as a promotion with World Club Magazine[7] gave her a third name, Hexe Hylia (Hylia the Witch).[8]

As the Fright Knights storyline differs considerably between North America and Europe, so does the role of Willa the Witch. Generally, she is consistently an archetypal wicked witch who uses her mastery of magical spells and dragons to assert control.

In the North American storyline, Willa the Witch is the true leader of Basil the Bat Lord and his kingdom of Fright Knights. However, she is more of a mischievous trickster than an outright villain, with her bio stating that she does not know if she wants to be a good witch or a bad witch.

In the European storyline, the witch is the enemy of the heroic Count Batlord, who is the leader of the Fright Knights. In Bricks 'n Pieces Magazine, Hubble Bubble intends to shoot her Balista at her enemies, which includes Count Batlord if he is not on her good side, and she flies her Dragonair while declaring that she is going to zap Count Batlord with her magic spells.

As retold in A Fright Night Tale, Willa noticed the knight Basil wander into her castle one cold stormy night, mistakenly believing that the castle was abandoned and could provide shelter from the storm. After frightening Basil with her bats and skeletons, Willa revealed herself and cast a spell over Basil, transforming him into her loyal Bat Lord.

In The Adventures of the LEGO Maniac (titled Adventures in the Magic Manor in Bricks 'n Pieces Magazine), Willa notices King Richard wander into the Witch's Magic Manor. She catches him and locks him in a cell, intending to keep him there for a few centuries. However, Richard is freed by the LEGO Maniac, and though Willa threatens to turn them both into toads, they escape with her Mr. Dragon and Witch's Windship.

In Enter the LEGO Holiday Zone, Bill and Jill visit the Night Lord's Castle while shopping for a special gift. Willa offers Jill some magic to turn Bill into a toad.

In Graf Fledermaus Ist Wütend: Wer Hat Meine Tapferen Ritter Gekidnappt?, Buta flies the Windship and arrives at the Night Lord's Castle. On her magic broom, she sneaks into the castle and pours a potion into the mouth of one sleeping Fright Knight, who goes missing the next morning. Three days later, Count Bat and the Fright Knights arrive at the Magic Manor and shoot down Buta's airship, and she surrenders along with her fellow wizards. Buta is forced by Batlord to use her crystal ball to reveal the missing knight's location: guarded by Buta's most dangerous dragon, Slimowitch.

The Time Cruisers comics in World Club Magazine follow the European version of the story, depicting Izralda as the Fright Knights' enemy. Commanding her two black dragons, Izralda plots to conquer the Fright Knights' kingdom. When she learned about the Star People flying UFOs, she planned to contact them and use their technology to rule the world.

Although Tim Timebuster and Ingo frighten away Izralda's dragons, she defeats Count Batlord in combat and then uses her magic to hypnotize the other Fright Knights into her minions. Then, she uses her magic to transform Count Bat's castle into a Star Tower, sending a beacon into space to signal the Star People.

However, Izralda's plan is foiled by Count Bat and Tim, who convince IXVIZIKIL to help them defeat the wicked witch. Therefore, Izralda instead uses her magic to combine the Witch's Windship, the Witch's Helicopter, and the Flying Time Vessel, transforming the Time Cruiser vehicle into a Witch Cruiser. She uses another spell to turn the Star Peoples' rays into harmless frogs. Tim tackles Izralda while Ingo snatches her wand and gives it to Count Bat, who forces her to surrender.

In the LEGO Racers video game, Willa the Witch appears in the third and sixth circuits as a CPU racer, as the representative of the Knightmare-Athon race course. Her minifigure parts are unlocked by completing Circuit 3 in first place, beating Basil the Bat Lord.

Aside from her racer appearance, another Willa the Witch minifigure appears on the Knightmare-Athon level as a hazard. She flies over the course in the Witch's Windship, launching cannonballs down upon the track below while cackling maniacally.

In LEGO Legacy: Heroes Unboxed, Willa the Witch is a Builder support unit with the abilities "Dark Magic Blast", "Curse", "Soul Call", "Rise Again, My Minion!", and "Jack-O-Beam". She is unlocked exclusively through the Master Shop, which requires Master Tiles from max-rank heroes, although her codex tiles may also be temporarily offered through Timed Quests such as Brixpedition Heroes.

Willa the Witch is one of the main villains of the Glyph Hunt story campaign, seeking to gather the four legendary Glyphs of the Elements. She steals Majisto's spellbook and then, when it fails to work for her, kidnaps Majisto himself. Upon recovering the first Glyph, Willa mind-controls Majisto and forces him to attack the Explorers, then flees to the kingdom of Crown King Brutus. There, she impersonates the king and leads the Explorers on a witch hunt before being exposed by Princess Verda and Dragon Master Burnabus as an imposter. She mind-controls Basil the Bat Lord to battle alongside her, but she is defeated by the Explorers, who bring her back to Piptown to keep an eye on her.

From their dialogue, it is revealed that Willa and Majisto once dated. Willa apparently is still bitter over the breakup, constantly making teasing and flirty remarks towards Majisto. According to promotional artwork, Willa wears her cape because she read superhero comics as a teenager.

Her backside, showing off the spider on her cape

Izralda in the Time Cruisers comics 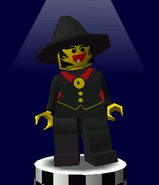 Willa as a playable racer in LEGO Racers 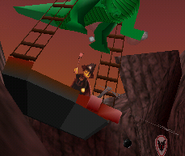 Willa as a course hazard in LEGO Racers 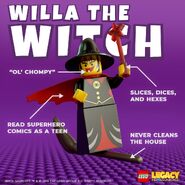 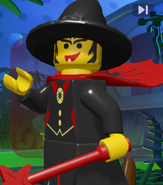 Willa in a conversation in LEGO Legacy: Heroes Unboxed

Willa and other Castle heroes in LEGO Legacy: Heroes Unboxed

Willa playing volleyball with Basil and Zombie in LEGO Legacy

Community content is available under CC-BY-SA unless otherwise noted.
... more about "Willa the Witch"
RDF feed
Accessories
Magic Wand, Broomstick, Wizard Hat, and Cape +
Appearances
2872 Witch's Fireplace
[[6037 Wit … 2872 Witch's Fireplace<br />6037 Witch's Windship<br />6087 Witch's Magic Manor<br />6031 Fright Force<br />6097 Night Lord's Castle<br />5703 LEGO Racers (Nintendo 64)<br />5704 LEGO Racers (PC)<br />5705 LEGO Racers (PlayStation)<br />5719 LEGO Racers (Game Boy Color)5719 LEGO Racers (Game Boy Color) +
ArticleRating
3 +
Image
WillaWitch.jpg +
Img1
WillaWitch.jpg +
Img2
Cas215.jpg +
InfoboxTemplate
Minifigure +
ShopDescription
Willa hasn't decided whether she wants to … Willa hasn't decided whether she wants to be a good witch or a bad witch. When Willa first got her crystal ball, she turned it upside down, filled it with water, and kept her pet goldfish in it. Now she keeps her friend Skully inside.</br></br>'Least favorite nickname: Witchi-poo</br></br>Favorite Nick at Night show: Bewitched'Favorite Nick at Night show: Bewitched +  and A spooky support unit who curses enemies w … A spooky support unit who curses enemies with powerful black magic. Always an open-minded witch, Willa doesn't like to discriminate when it comes to casting spells -- she'll hex you, and your little dog, too!Trivia<br/>Don't let that snaggletooth fool you -- Willa is as manipulative and maniacal as they come. Despite Basil the Bat Lord seeming like the obvious leader of the terrifying Fright Knights, Willa is the real minifigure behind the curtain in Bricksylvania, pulling on everyone's puppet strings. When she's not busy controlling her servants with dark, evil magicks, Willa enjoys curling up with a good book full of darker, more evil ones. Y'know, for research purposes.The Witching Hour<br/>Premiered in 1997.Witch Is Best?<br/>Has appeared in 5 sets.Toil and Trouble<br/>Is also known as Hubble Bubble in the UK.Vroomstick<br/>Appeared in the "Lego Racers" video game.Spooky Chapeau<br/>Is the first minifigure to use a black version of the Wizard's Hat piece.Sweeping Influence<br/>Her broomstick comes from the Fabuland product line.The Bat Lord's Boss Lady<br/>Is a minifigure only found in the Fright Knights subtheme.only found in the Fright Knights subtheme. +
Theme
Castle +
Title
Willa the Witch +
Txt1
Cape +
Txt2
No cape +
Variations
Without Cape +
Years
1997 - 1998 +
Advertisement