Windra is a Legends of Chima minifigure released in 2013.

Windra has white fur, with yellow eyes,White hair and is a member of the Wolf Tribe. She wears a mix of furred clothing, as well as some metal. She wears a cape from time to time.

Windra is a wolf, that being said, is probably very social, and definitely loyal to her tribe, as all wolves are. Worriz has a bit of a crush on her, but although she may love him back, she can and most definitely has been a jerk to him. Seeing as how she keeps her fur clean whilst working on machines,she could be a very organized and clean wolf. 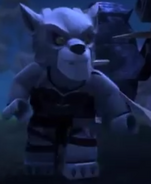