"If there's a steady paycheck in it, I'll believe anything you say.

Unlike the other three Ghostbusters, Winston was not originally a university professor. Winston applied for the job late in the movie after business started to pick up. As part of the interviewing process, Janine asked him if he believed in many things paranormal, to which he said he would believe anything as long as the pay was good. Nonetheless, Winston was hired by Ray instantly; though it may have been since he was the only one who applied for the job. Before applying to the Ghostbusters, he had went to Air Force Command ECM school, and had a black belt in karate, and was a small arms expert. Throughout most of the movie, Winston was merely being trained for his new job, with Egon and Ray showing him how the storage facility worked, as well as explaining the ins and outs of P.K.E. surges. He also seemed confident in his ability to use a Proton Pack.

Despite being a newcomer, Winston had some very interesting theories about the supernatural. Winston actually talked with Ray about how he wondered if all these ghosts were a sign of the apocalypse, to which Ray was silent with apprehension. Winston already bore witness (before the mayor's chamber and councilmen), about having seen first-hand the unexplained, super and paranatural. Winston had a major first encounter with the supernatural when he witnessed a storm of ghosts blow off the roof of the firehouse and escape. He and his team worked their way up to Dana's apartment battled Gozer in the form of the Stay Puft Marshmallow Man. After the evil god was defeated, Winston vigorously exclaimed that he loved the town. 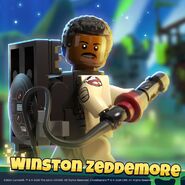