Wonald is a Legends of Chima minifigure that appears in Legends of Chima: The Animated Series. In several books, he appears to like salad and vegetables over meat and is a sort of "outcast" among the wolves, though he still travels with them. In the show, he appears to be a wolf cub with short legs. Wonald is the only known Vegetarian wolf, as he doesn't seem to like meat and only eats bananas, apples, and healthy food. In the Hundred Year Moon episode, Wonald (infected by the moon) finds G'Loona, who tells him that she knows where more bananas are, which takes them both to the Gorilla's hideout, where Laval, Eris, and Skinnet are. When Wonald runs out of bananas, he starts eating the hideout's walls. he and G'loona listen to Laval and Cragger's stories of the Outlands in Fire Dreaming.

His name is a pun on Ronald. 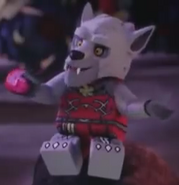