Brickipedia
Register
Don't have an account?
Sign In
Advertisement
in: Class 3 articles, The LEGO Batman Movie minifigures, Minifigures introduced in 2017,
and 3 more
English

Wonder Dog is a 2017 minifigure that appears in The LEGO Batman Movie.

Wonder Dog is a superhero dog who belongs to the teenagers Wendy Harris and Marvin White. This has made him a companion to the Super Friends. He possesses no super-powers or crime-fighting aptitude, but he does wear a cape.

Every good super-team should have an animal sidekick, and Wonder Dog is the Justice League’s. This crime-sniffing canine may not have any significant super-powers (beyond the ones a regular dog has, anyway), but when it’s time for the League to party down, he puts his paws up on the turntables and mixes up a mean beat as the world’s most doggedly good DJ! Bat-Fact: I’ve been thinking about getting a dog. I’ll bet he’d be a real ace at helping me catch Catwoman.

Wonder Dog is the disk jockey in the 57th annual Justice League Anniversary Party in the Fortress of Solitude. 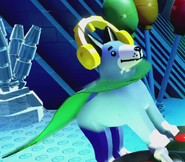 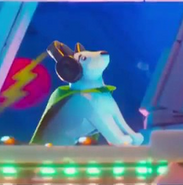