The Wondrous Weightlifter is a minifigure introduced in 2012. He appears in the Minifigures series 8909 Team GB Minifigures.

The Wondrous Weightlifter has red legs, printed with blue, white, black and orange stripes. The blue and white stripes continue up his body to his red torso. He wears a dark brown belt with a silver buckle, and has bare yellow arms and hands. He has a yellow head with an enthusiastic expression, with beads of sweat rolling down his face. He has short blonde hair. Like all the Team GB minifigures, he wears a red and gold medal. 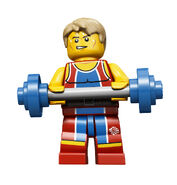