Wong is a Marvel Minifigure first released in 2018.

Wong is the faithful companion of the Sorcerer Supreme, and a skilled sorcerer on his own. He worked with the Ancient One and, after the Ancient One's death, with Doctor Strange.

At some point, he began participating in an underground fighting ring based in Macau, run by Xialing. While participating there, he became good friends with Abomination, even training him personally to improve his combat skills. He later joined Shang-Chi and Katy in San Francisco for some karaoke. 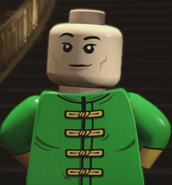