Sheriff Woody is the protagonist of the Disney/Pixar Toy Story movies.

Woody is one of two Toy Story minifigures, alongside Jessie, to feature extra-long legs and arms that are, so far, unique to the Toy Story line. His head and hat form a single piece, and his torso sports back printing, showing a pull-string that, in the movies, activates Woody's electronic voice. He has two variations; one regular, and one stained. Woody is only made in Chinese plastic.

Woody is the lead protagonist of the three Toy Story films and is the favourite toy of his owner, Andy. This made him the leader, and most respected, of Andy's toys, and he makes sure that all the toys are well cared for. 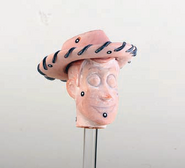 A prototype of Woody's head

LEGO The Incredibles
Add a photo to this gallery