The Wookiee Warriors body and legs are solid brown with no markings. His head brick has a helmet with a golden top and the rest of it brown. He has a belt with a golden buckle. He also has a white necklace with a gold medallion. His nose is black and his eyes look like they are closed. His mouth is lighter brown.

Wookiee Warriors were Wookiees trained in the art of combat, living on their homeworld of Kashyyyk. They fought on Kashyyyk during the two Battles of Kashyyyk, against the Confederecy of Independent Systems and the Galactic Empire. One, named Tarfful, assisted Chewbacca in helping Yoda escape the planet after Order 66 was given to all Clone Troopers around the galaxy. Some were enslaved by the Empire, only to be rescued by the Lothal Rebels.

The Wookiee Warrior without weapons 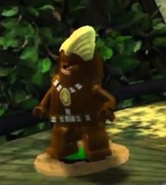