Workman Jon is a Town minifigure introduced in the year 2000. He appears in the video game LEGO Racers 2 at the construction site at the west of Sandy Bay. He tells the player how he loves smashing things with his wrecking ball. 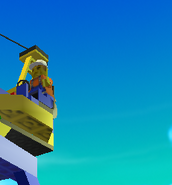 The Workman Jon minifigure that appears on the crane in town on Sandy Bay
Add a photo to this gallery
Retrieved from "https://brickipedia.fandom.com/wiki/Workman_Jon?oldid=1619294"
Community content is available under CC-BY-SA unless otherwise noted.