Wyplash is a Ninjago skeleton villain. According to the official Ninjago site, he has the ability to turn his head backwards. He seems to have gained this ability due to his extreme paranoia. He is the general of Ice.

Wyplash wears the same hat as Sensei Wu and black body armour with white spikes. His head is a new mould and has large red eyes. Wyplash has printed nostrils and a mouth with a large crack on the left side. His body is a skeleton body with a white, printed loincloth at the bottom of the piece. His arms and legs are the new ones introduced for the Ninjago skeletons.

In 2019 two new Wyplash minifigures were introduced, both wearing a conical hat like Sensei Wu's and with the same head, printed with a grin missing one top tooth; the two also have the same arms and legs. However, the one that comes in set 70670 has black shoulder armor and a ridged torso, both of which he shares with the Ninjago: Legacy versions of Kruncha and Nuckal, except for a blue sash printed on his hips. Kruncha also has the same head printing as Wyplash, whereas Nuckal uses the same head but different printing. The LEGO Ninjago Magazine variant, by contrast, sports a standard all white skeleton torso mold that has been in use since 2007.

While Wyplash does not appear in the first four episodes of Ninjago: Masters of Spinjitzu (TV series), the General of Ice deems himself as the 2nd successor of Samukai and now serves Kruncha, as seen in Secrets of the Blacksmith (he was scouting around). Later, he meets up with Kruncha and Nuckal and comes up with a plan that Kruncha accepts to free more skeletons from the Underworld via an entrance through the Fire Temple, and build up the Skulkin forces. However, the plan goes awry when Kai and Nya trap the remaining undead (this including Wyplash) within the Underworld. It is unknown of what became of him after his imprisonment. 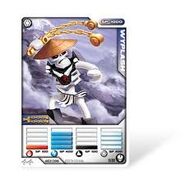 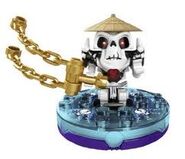 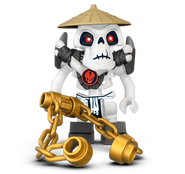