Brickipedia
Register
Don't have an account?
Sign In
Advertisement
in: Class 3 articles, Minifigures introduced in 2013, Minifigures (theme),
and 5 more
English

This article is about the Series 11 minifigure. For other uses, see Yeti (Disambiguation).

The Yeti has a white body, as well as white arms. His head is a new mold that covers most of the torso, and is also white with a light blue face. He has black eyes with white pupils, and pale yellow teeth. His hands are light royal blue. His legs are white, and have light blue fur printing on them. His torso is also printed with light blue fur designs. He carries a transparent fluorescent blue popsicle.

Yeti appears in LEGO Legacy: Heroes Unboxed as an Attacker-Tank hybrid with the abilities Freeze Pop, Block of Ice, The Abominable Snowman, Snow Daze and the Ultimate ability You Scream for Ice Scream.

He was also in The LEGO Movie featurette "Behind The Bricks"; he is shown walking when Wyldstyle is talking. 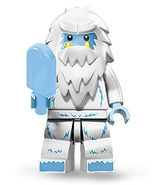 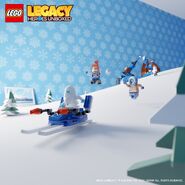