Yoda is a minifigure introduced in 2002 as part of the Classic Star Wars and Episode II lines. Since 2002, Yoda has had seven different variations to date.

To date, Yoda has appeared in three different forms - one for sets based on scenes from the main Star Wars movies, another from sets based on The Clone Wars, and the third an exclusive Christmas variation. His first variation came about in 2002 with the release of Episode II: Attack of the Clones sets. Yoda appeared in 7103 Jedi Duel armed with a green-bladed lightsaber with a chrome silver hilt. This variation had a light brown torso piece with some darker brown printing on it to better represent Yoda's clothing, and green hands. The leg piece is also light brown, and is a shorter version of the standard Minifigure leg to help represent his short stature. Yoda's head piece was specifically designed for this Minifigure, having been shaped to a likeness of the Jedi Master's head. The piece is naturally the same colour green as the hands.

This Minifigure made its next appearance two years later, this time in a set from the Original Trilogy 4502 X-wing Fighter. Yoda once again came with a green-bladed lightsaber, but with a bar piece (the same piece used as a lightsaber blade) in dark brown. This piece is used to represent the gimer stick that Yoda is known to usually walk with. The last appearance of this version of Yoda so far was in 2005, in the Episode III: Revenge of the Sith subtheme. This Yoda also had his walking stick as an accessory, but did not have a lightsaber. He is also sometimes seen on a hovering chair.

Yoda's second variant is currently exclusive to the 2009 8018 Armored Assault Tank (AAT) and 2011 7964 Republic Frigate . This variant retains the same colour and type of leg piece and hands, but his torso piece differs in its printing. The darker brown printing representing Yoda's inner tunic is more predominant in this variant, and some green also appears at the top of the torso piece to show a neck. This variant also has a completely new headpiece, with a larger head and ears. The head piece is also made of a rubbery material, and usually turns much more easily than a normal Minifigure head. The head piece also has printed eyes, being consistent with the design of giving Minifigures from The Clone Wars subtheme a more "cartoon-like feel". In the set this variant appears in, a green-bladed lightsaber with a chrome silver hilt is included for Yoda.

His third version is an exclusive version only found in one set, 7958 Star Wars Advent Calendar. This version depicts Yoda wearing a red Santa-like suit. It has the same version of head as the Clone Wars version.

Yoda will appear again in 2013, with a redesigned version.[1] His torso is redesigned so he is now wearing a tan cloak with an orange shirt printed underneath and now has a printed hood on the back. He includes the same head as the Clone Wars version with printed eyes and hair. He has the same tan legs. This variant will be found in the 75002 AT-RT set and will be the first Yoda variant to wield a green bladed lightsaber.

Yoda has also been released in a newly redesigned Prequel Trilogy Variant. This variant features a newly moulded headpiece [1] that sports the new Olive Green colour which will be used for his hands as well with painted hair, not moulded, this time. He has the same tan legs, but also has an all new redesigned torso again with a hood on the backside.This makes Yoda look more realistic to the movies. He is featured in the 75017 Duel on Geonosis set.

As well as his standard movie appearance from the first game, Yoda received a Force Ghost variant in LEGO Star Wars II and The Complete Saga, representing Yoda's spirit that appeared before Luke Skywalker in Return of the Jedi. This variant is transparent blue in color, and can't be detected by enemies. Unlike the standard Yoda, the Force Ghost is not unlocked automatically through completion of Story Mode, and must be purchased for 1,200,000 studs in the Cantina after the player has finished all of the Episode VI levels.

In the first video game, Yoda was able to use the Force, perform a double-jump, and crawl through chutes that only small minifigures could fit through. He's retained these abilities in all subsequent releases, and as of LEGO Star Wars II, he can build disassembled LEGO objects.

Yoda also appears in LEGO Star Wars III: The Clone Wars. He is based on his The Clone Wars variant, with animated eyes and longer ears. Yoda retains all of his abilities from the previous games, along with being able to cut through certain doors, perform lightsaber throws, and jumping up a set of two walls by plunging his lightsaber in one wall and jumping to the next. In this game, Yoda moves at the same speed as other characters. He only appeared in one level; Ambush.

Yoda was a Jedi Master and leading member of the Jedi High Council for centuries. Later on he would become a Grand Master. In his time, Yoda had a hand in training a large number of Jedi to some extent, including Count Dooku, Mace Windu, Kit Fisto, and Luke Skywalker. Yoda participated in many battles during the Clone Wars, including the first battle on Geonosis, where he rescued the remaining Jedi in the Geonosis Arena along with several Clone Troopers in Republic Gunships. He then confronted his former Apprentice Count Dooku, now a Sith Lord, in a lightsaber duel after Jedi Anakin Skywalker and Obi-Wan Kenobi failed to defeat him themselves.

Towards the end of the Clone Wars, Yoda was fighting alongside the Wookiees on Kashyyyk, when Order 66 was given out to all Clone Troopers by Chancellor Palpatine, ordering them to eliminate any Jedi they saw. Yoda escaped from the planet with the help of the Wookiees, including Chewbacca, and made his way to Coruscant. On the way, he met up with Obi-Wan Kenobi who had also managed to escape, and they proceeded to the Jedi Temple. They discovered that the Jedi there had been massacred, and that it was Obi-Wan's former Apprentice Anakin Skywalker, now known as the Sith Lord Darth Vader, who had led the assault. Yoda ordered Obi-Wan to confront Vader while he attempted to neutralize Palpatine, the new Emperor of the Galactic Empire. Yoda then made his way to Palpatine's office, knocking out his Royal Guards on the way. He initiated a duel with the Sith lord, but was unable to defeat his evil adversary, and had to go into hiding to survive. Yoda found his way to the remote planet of Dagobah, where he stayed in isolation for many years during the Empire's reign.

Three years after the events of the battle of Yavin, a Jedi-in-training named Luke Skywalker along with his droid R2-D2 crash-landed on Dagobah in an X-wing, after Luke received a message from his now-deceased Master, Obi-Wan Kenobi, telling him to seek out the only other Jedi left in the galaxy. Luke and R2 eventually came to find Yoda, and Luke underwent some Jedi training from him in the ways of the Force. It was during this training that Luke had a vision of his friends in pain in a city of clouds, and set off in an attempt to rescue them, despite Yoda urging him to remain on Dagobah and to complete his training.

One year later, Luke returned to Dagobah to complete his training. However, in this time Yoda had grown sick, and knew that death was upon him. He informed Luke that his training was complete, and confirmed that Darth Vader was Luke's truly Luke's father. Close to death, Yoda revealed that there was another Skywalker, Luke's sister, Princess Leia. At the age of 900, Yoda died, becoming one with the Force along with Obi-Wan Kenobi.

During the celebration on Endor after the second Death Star was destroyed and the last two Sith were killed, Luke saw the spirits of Obi-Wan, Yoda, and his now deceased, but redeemed father, Anakin Skywalker. 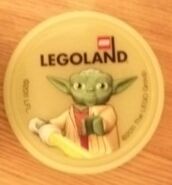 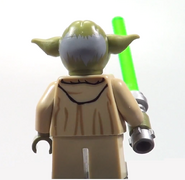 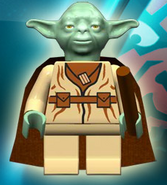 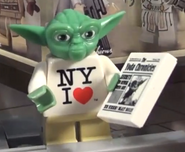 Yoda with his I Love New York shirt. 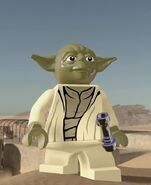 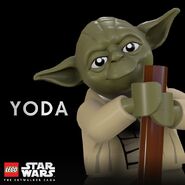