Yondu Udonta is a Marvel Super Heroes minifigure released in 2017.

Yondu Udonta is a Centaurian and one of the members of the Guardians of the Galaxy team in the 31st Century that was lead by Starhawk.

Yondu Udonta is a Centaurian, leader of the Ravagers and father figure to Peter Quill. When Quill betrayed the Ravagers and stole an Orb for himself, Udonta led the hunt for his former ally. Eventually Udonta caught up with Quill but was convinced to help him in the war against Ronan the Accuser, who was threatening to use the Orb's power to destroy the planet Xandar. He died after the battle against Ego the Living Planet, sacrificing himself to protect Quill and his friends. 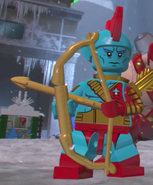