Zach Mitchell is a Jurassic World minifigure to be released in 2015, based on the character portrayed by Nick Robinson in the film Jurassic World.

Zach Mitchell is a teenage boy who went, with his younger brother, Gray Mitchell to Jurassic World. He is the older nephew of Claire Dearing, the Park Operations Manager of Jurassic World. During their visit, they witnessed the Mosasaurus Feeding Show and took a ride in the Gyrosphere. However, the Gyrosphere they were in was attacked by the park's newest attraction, the Indominus rex, though they managed to escape. After this attack he and his brother made it to Main Street only for a mixed flock of Dimorphodon and Pteranodon that were freed from their enclosure to attack the humans in the area and reunited with Claire. When the Indominus rex arrived Owen Grady protected them from the hybrid. 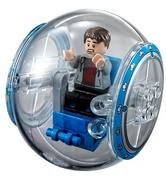