Zam Wesell is a Star Wars Minifigure introduced in 2002. She is a bounty hunter. Zam is exclusive to 7133 Bounty Hunter Pursuit.

The Minifigure features light purple torso and leg pieces, both of which have additional printing in shades of grey and a darker purple to represent the clothes that Zam is known to wear. The head piece is double-sided - one side showing the human form that Zam typically took, with the lower face obscured by a purple cloth, and the other representing Zam's natural Clawdite face. This minifigure has a light grey helmet accessory with darker grey goggles. Zam is also equipped with a black gun.

Zam made her first, and only, video game appearance in LEGO Star Wars: The Complete Saga. In the game, she is considered a bounty hunter, so she can perform actions exclusive to bounty hunters. She can throw thermal detonators, use a blaster, grapple up walls, and can use typical melee-style fighting.

Zam was a bounty hunter from Zolan. Like other Clawdites, Zam was a shape-shifter, though she was much more skilled than most others, being able to mimic the appearance of almost any species for an indefinite amount of time. On several occasions, she worked with fellow bounty hunter Jango Fett, and developed a close friendship with Fett's son, Boba. Zam was known to favor the KYD-21 blaster pistol, and owned a personal airspeeder and assassin droid. She was eventually shot by Jango Fett with a toxic dart, due to her being captured after being chased through Coruscant's skyline by Jedi Obi-Wan Kenobi and Anakin Skywalker, and beginning to divulge information to them about Fett.

Wesell's face in its true form.

Zam in LEGO Star Wars: Anakin to the Rescue 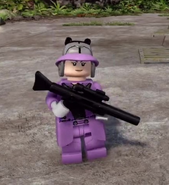