Zeb Orrelios is a Star Wars minifigure released for the first time in 2014 in set 75053 The Ghost.

Zeb Orrelios is a minifigure who is a member of the Rebel Alliance and is a main character in the new animated series Star Wars Rebels. He is the gunner of The Ghost and later becomes chief of security for the base of Phoenix Squadron. Zeb-full name Garazeb-is a Lasat, whose species were among the first to resist the tyranny of the Empire. This led to the invasion of their planet of Lasan, and resulted in the death of the majority of the Lasats who inhabited it. Zeb was one of the few survivors, and indeed came to believe he was the last of his people for some time. He ended up joining the crew of the Ghost led by Kanan Jarrus and Hera Syndulla, and over time came to be comrades with C1-10P, Sabine Wren, and Ezra Bridger.

Following Ezra's addition to the crew, Zeb encountered and developed an antagonism with Agent Kallus, an Imperial Security Bureau Agent who had taken part in the invasion of Lasan and who carried a Bo-rifle, a weapon unique to the Lasan Honor Guard. The two would clash on a number of occasions, but after being stranded together on a moon of the planet Geonosis were forced to work together to survive. As a result, Kallus began to rethink his loyalty to the Empire and eventually became a double agent for the Rebellion. Zeb later encountered two other survivors of Lasan, who informed his crewmates that he had been captain of the Honor Guard, something he had never shared with them. Through embracing his heritage Zeb was able to find the lost homeworld of Lira San, where other Lasats still survived, and thus gained a new sense of purpose fighting to keep his people safe from the Empire.

Zeb has a new moulded headpiece to resemble his alien heritage. He wears a yellow sleeveless uniform and has a long rifle made from two medium blasters and a black lightsaber hilt piece. 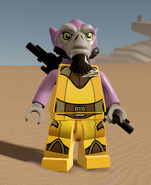