Zev Senesca is a Star Wars Rebel Pilot minifigure released in 2010. He appears in three sets, one of them is a battle pack.

Unlike previous Rebel Pilots, Zev features a more detailed, double sided printed torso, in addition to a new face and new design painted on the helmet. However, he still had orange legs with a grey leg joint. The face printing for the strap of the helmet is the same as the Clone Pilot's and Captain Jag's.

Zev Senesca was born and raised on Kestic Station, a trading outpost on the fringes of the Bestine system. A stopover point for free-traders with no affiliations, especially ties to the Galactic Empire, Senesca became familiar and skilled in the life of a trader and pilot. His parents were persons of high ideals. They were known for trading in virtually any kind of good and, in their later years, began running arms for the fledgling Rebel Alliance. Although supplying the Rebellion was illegal and punishable by death, they felt they were doing the right thing and sought to instill this same kind of morality in their son. Growing up in such a free environment and surrounded by people with such strong ethical values, Senesca was a perfect candidate for recruitment by the Rebellion. His parents encouraged him to leave Kestic and take up arms with the Rebellion, which he soon did. Under his parents, Kestic soon became a vital link in the Alliance's supply chain. However, Rebel supply lines were traced back to the station. The Star Destroyer Merciless, on a tip from an informant, arrived and, without stopping to take prisoners or ask questions, destroyed the station. All aboard were killed, including Senesca's parents. His response to this tragedy was not grief, but anger. He blamed the Alliance for the destruction of Kestic Station, and for the death of his parents. And so, after no more than a year of fighting for the Rebellion, he left the Alliance and headed for deep space and a life as a free-trader. It was not long until Senesca learned the shocking truth about what happened. A "friend" he had confided in concerning Kestic's Rebel involvement was the informant who revealed the station's ties to the Empire. He had trusted this "friend," and the leak in security of the supply line was Senesca's fault. This realization gave him a newfound attitude toward the Rebellion, and he came to accept his own responsibility. It was not long after this that Zev rejoined the Alliance to fight the true enemy—the Empire.

Senesca's second stint with the Rebellion saw him become known as a worthy starfighter pilot. During the evacuation of the Rebel base at Alis Point, Senesca single-handedly held off three TIE/LN starfighters, while an unarmed transport fled into hyperspace, an action that helped earn the pilot a place in Commander Narra's newly formed Rogue Squadron. As a member of the nascent Rogue Squadron, Senesca flew under the call sign Rogue Two. He was the oldest member of the squadron throughout his service with them, and stayed pretty much to himself. Six months after the Battle of Yavin in 1 ABY, he fought with the Rogues in the campaign against Moff Kohl Seerdon, including the raid of Imperial tibanna gas facilities above Taloraan; the destruction of the Weapons Research Facility on Fest; the Battle of Chandrila; the Rogues' raid on Sullust; and the protection of bacta facilities on the planet Thyferra, in which Seerdon was finally killed.

Along with the rest of Rogue Squadron, Senesca was assigned to the newly formed Echo Base on the planet Hoth in 2 ABY to protect the Alliance High Command. When Luke Skywalker failed to return from a routine scouting mission in 3 ABY, Han Solo went out to locate his missing friend. Neither returned before nightfall, when the base's shield doors had to be closed to protect the base from the planet's brutal icy winds. At daybreak, Senesca led the T-47 airspeeder patrol sent out to locate them. He successfully found Skywalker and Solo stranded amid the snow, having survived an overnight blizzard. When the Empire discovered the Rebel base and launched a massive ground assault soon thereafter, Senesca once again manned his airspeeder and flew with Rogue Squadron to hold off the invasion in order for the base's troop transports to evacuate. He managed to maintain control of his craft through most of the battle despite being hit by several laser barrages by the horde of AT-AT walkers. Late in the battle, he formed up with Skywalker on an approach of the Imperial line, ordered to try and bring down one of the walkers with the speeder's harpoon and tow cable, a trick that Antilles had successfully employed to bring down one of the walkers earlier. As his gunner, Kit Valent, prepared his tow cable, Senesca, Skywalker, and Derek "Hobbie" Klivian approached, his speeder suffered several direct hits from multiple walkers and he was killed along with his gunner. During his time with the Rebellion, Senesca was distinguished for his actions in combat. In his career, he had 48 confirmed kills and received several commendations for his actions. 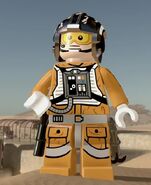