"With a costume covered in astrological symbols, the mystical Zodiac Master™ had a reputation for being able to foresee disastrous events before they happened. Crooks paid him to predict whether their next caper would succeed or fail…until Batman™ proved that the Zodiac Master was sneakily creating the very events that he was predicting" —LEGO.com

Zodiac Master is a DC Comics minifigure who appears in The LEGO Batman Movie.

Zodiac Master was the alias of a costumed criminal who worked in Gotham City. He started his criminal career by predicting accidents in order to gain the trust of several gangsters and criminals. He didn't reveal that he had rigged the accident and soon, he was confronted by the local heroes Batman and Robin, who managed to infiltrate Zodiac Master's hideout. The masked criminal managed to fight them off using several weapons based on the zodiac signs, but he was eventually outmatched and captured. 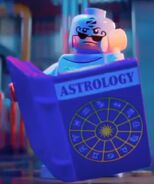