"In the smoke we see visions of our future, visions of death."
―Zolm, to Nizam.

Zolm, also known as the Hassansin Leader, is a Prince of Persia minifigure released in 2010.

Zolm has half of his face burned or scarred, despite not having any burn marks or scars. His eyes are white with no pupils, which is meant to show that he goes into trances. He wears a hood and carries two red snakes as weapons.

Zolm acts as a Persian spy, but is in fact the leader of the Hassansins. He managed to train snakes as his own weapon against enemies. He throws his snakes at enemies, and the snakes inject their poison, killing the target. He is also able to use a sword. His final fight was with Dastan in the cave of the Sands of Time. He died in the cave by being bitten by his own snake (Princess Tamina grabbed the snake and scraped the snake's fangs against Zolm's face) and falling into a chasm. When Dastan turned back time, Zolm was spared.

Zolm has half of his face burned or scarred. He wears a turban/headgear and carries Pit Vipers as weapons. Zolm also has snake like swords, he also has the ability to see upcoming events. He said that in trance he can see missions of death. Zolm is also a brilliant tracker. Zolm controls the vipers like it's his own weapon. 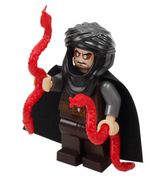 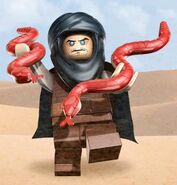 Zolm in a link on the theme homepage.

Zolm in the set.
Add a photo to this gallery