Zombie is a Minifigure released in June 2010 as part of Series 1. He has light grey skin and dark grey ripped pants and a shirt with some rips in it. He comes with a shovel, a turkey leg, and a display stand. The Zombie also appears in the set 850487 Halloween Accessory Set in a different variation, but the only difference is that the colors of the suit are swapped, where the tie is grey and the suit is brown, instead of the inverse.

The Zombie has dark grey legs, torso, and arms, with light grey flesh tone to represent the colour of decaying flesh. He has printing on his legs of three tears in his clothing, showing exposed grey skin, and on his torso are three similar rips, also showing grey skin and his tan coloured shirt underneath his suit jacket. The printing on his torso shows his suit's collar, his shirt's collar, the buttons and button holes on his suit, and a brown tie which is loose around his neck. The Zombie has slightly confused facial expression, with an open mouth showing uneven teeth and missing teeth, red eyes with grey bags underneath them, two eyebrows (one of which has a scar on it) and wrinkled skin around the mouth and the eyes.

The Zombie is dancing with the Nurse at a show. The Nurse knocks off the Zombie's head and his torso when they are dancing. The crowd, a collection of Series One minifigures, gasps. The Zombie puts himself back together and the Nurse and Zombie take a bow. The group of minifigures claps and then the screen turns black. 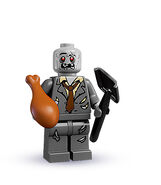 The Zombie on his base 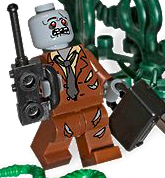 Zombie's chicken leg compared to a regular one.

The Zombie in LEGO Worlds.
Add a photo to this gallery

Retrieved from "https://brickipedia.fandom.com/wiki/Zombie_(Minifigures)?oldid=1955905"
Community content is available under CC-BY-SA unless otherwise noted.